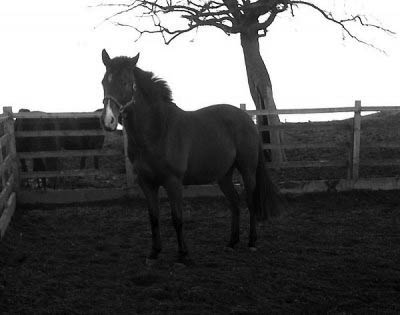 Well, I֭ not superstitious but Friday the 13th of May 2011 was such an unlucky day for me. I was really ill and got that dreaded phone call: ӈi, brought Patrick in from the field and something is not right looks like he has been kicked and his stifle is really soreʓ.

Patrick’s my horse – so a phone call to the vets explaining what happened and straight up to the stables it was. After examining him it was determined that the best way to proceed was to x-ray his stifle. As you do, we were hoping that there was nothing wrong.

Seems that that was wishful thinking, the vets developed the x-rays and called to say that he had fractured his stifle. This meant that he was to be put on box rest, and he had to be kept as calm as possible to let the fracture heal. Easier said than done as he is a five year old purebred thoroughbred!

After spending all summer on box rest it was finally decided that following more x-rays that he could start his rehabilitationɠmeaning months of hand walking gradually building up the time so that he would build up all the muscle that he had lost and helping with the slight ligament damage that he had.

Finally it was agreed that that he would be able to start doing some groundwork to help develop his muscles so that he could be ridden again. This started really well, but seems that the time inside had made him rather sensitiveɠWhilst long reining him one day he spooked at a pheasant in a field nearby, caught me off guard as he bolted and I ended up landing on my head resulting in a concussion.

The vet came again a few months later and agreed that he was feeling lots better and that it was time to get back on him. This still meant a lot of walking and not pushing him too much as he was still recovering, but it was amazing how well he was doing.

I must have spoken too soon though, we were riding around the arena one afternoon and it was a little bit windyɠHe decided to spook at the ӧrass monstersӠand went flying around the arena! That wasnִ the bad part though he did what all horses do and set off towards the gate. Once there he came to an abrupt halt, dropped his shoulder, I lost my balance and came off. As you do I got back on and rode until he managed to get round the scary corner without spooking.

What I hadnִ realised at the time was that I had caught my finger when falling off, only when I took my gloves off did I notice that it had swollen upɠso another trip to the hospital was in order just to have it checked out. It was bad news though, turns out that I had fractured my finger and had to have it in a splint for weeks!

So once the splint was off lessons were started and a lot of groundwork and desensitising was done to try and help him not to be so over reactive to everything.

After a couple of months of parelli style groundwork and lots of riding we decided to push him that little bit moreɠOn May 13, 2012 we went out with another horse for a short hack and he was a little angel, he was quite overwhelmed by it all but the trust and respect that we have built up saw us through those hesitant moments.

For a horse that we were unsure would be able to do much after the fracture, he is now working in a shape, excelling in walk, trot and canter, and has even been over trotting poles and some small jumps!

We couldnִ have done this though without lots of determination, hard work and help from friends, family and even the vetsɠI am so glad that I took out insurance now though!