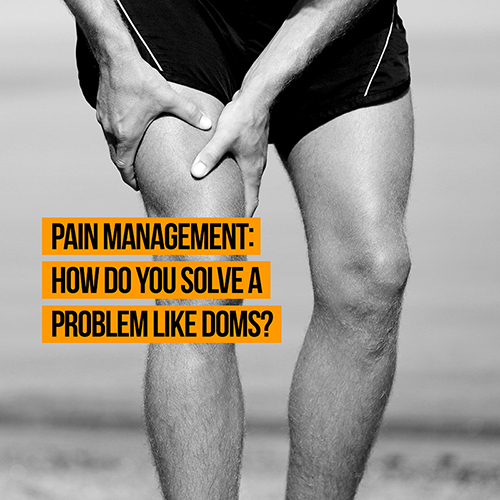 Whether you are pulling on your first pair of running shoes or just about to finish training for your tenth London Marathon, chances are that two or three days after your workout you may find yourself in some kind of pain or discomfort.

This often debilitating muscle tenderness, sometimes referred to as ‘muscle fever’, is called Delayed Onset Muscle Soreness, or DOMS, and it can last anywhere up to 72 hours, or in extreme cases even longer.

Not to be confused with regular muscle soreness, that you may feel immediately following intense exercise, DOMS onset occurs several days after your training and differs in severity and duration.

Though it isn’t particularly dangerous – unlike a tear or a strain – if you are struggling to get out of bed in the morning, or find it difficult to go up and down stairs, it is probably best to give yourself a break from training for a day or two, try and eat plenty of protein foods (eggs/meat/soy) as these will aid in your recovery, kick back and relax.

But what precisely is DOMS and is there anything that you can do to stop it or even just deal with it better? PhysioRoom.com dug down deep into the dark depths of DOMS to try to find the answers and help you to understand just what’s going on.

To put it simply, DOMS is stiffness, pain or soreness felt in the muscles, sometimes as early as 8-12 hours after exercise.

DOMS is more likely to occur following the onset of a new training program, a dramatic increase in your intensity during your workout, or if you have changed the sport you are playing.

The pain associated with DOMS is different to the kind of pain you may experience during a workout and differs greatly from the acute and sudden pain caused by injuries like muscle sprains, strains or tears.

The muscular soreness associated with DOMS is a common response to training and is all part of the adaptation process your body undergoes when you exercise; ultimately leading to increased strength and stamina as your muscles rebuild and recover.

However, muscle discomfort is not the only symptom of DOMS. Other common characteristics include joint stiffness and a reduced range of motion, swelling and a temporary decrease in muscle strength.

In short, it can often make you feel like you have just gone 12 rounds in the ring with 12 Mike Tyson’s.

It was once believed that DOMS was caused by a build-up of lactic acid in your muscle tissue. However, recent research has suggested that DOMS is caused by a number of factors, namely the body’s inflammatory response to exercise, amongst a few other variables.

It is commonly believed that DOMS is caused by your body’s response to the microscopic tearing of your muscle fibres, which can occur when you are doing virtually any exercise, but is more closely associated with plyometric exercises (training designed to produce rapid, powerful movement) and resistance training such as weight lifting.

How long and hard you exercise for in the first place will affect the amount of tearing and soreness that you feel and the type of exercise that you undertake can also be a contributing factor to your level of discomfort.

When this microscopic damage occurs, your body fires up its inflammatory response system in order to meet that damage head on and protect the body from further injury. Your immune system sends cells to the damaged area to activate repairing growth molecules and ‘clean things up’, resulting in an increase in the overall ability of your muscles to stand up to any future damage.

Basically, your body is built to naturally adapt to the changes caused by exercise exertions and your muscle structure will ultimately improve following the repair, albeit not without some pain and discomfort – “no pain, no gain” you might say.

DOMS is usually more painful and severe for novices, but it’s not uncommon for you to experience it throughout your training lifetime, every time you begin a new workout program or raise your level of intensity. That said, the level of soreness is likely to subside the more you become accustomed to particular workouts; you may even get to a point where the same workout no longer gives you any pain.

The Science Of DOMS

Though you may feel that DOMS is caused by every exercise, it is important to understand that it is normally when we perform certain types of exercises, contracting muscles in particular ways, which will cause you the most pain and discomfort.

Eccentric muscle contractions (movements that cause your muscle to contract with force while lengthening) appear to result in more severe and extreme cases of DOMS, causing greater soreness than with concentric movements (when you bend your elbow and bring the weight towards your shoulder during a bicep curl) or isometric contractions (where the muscle fires but there is no movement at a joint).

Examples of eccentric muscle contractions may include going down stairs, running downhill and the downwards motion you experience during squats and push-ups. Additionally, there can be swelling in your muscles following these exercises, which may contribute to increased soreness.

Eccentric muscle contractions rely more heavily on type II muscle fibres (fast twitch), which are more susceptible to damage than type I (slow twitch), meaning more disruption to your connective tissues and an increased release in the enzymes that deal with repairing muscle damage, resulting in an increase in pain.

When you hear that your muscle is being damaged, you may be inclined to think that it’s a bad thing. However, the process of damaging muscle and breaking down its structure is just a part of the strength, fitness and body-building process. It’s natural.

It doesn’t really matter if you are young or old, male or female, overweight or underweight – DOMS doesn’t discriminate in any way – any and all people can and will suffer from it.

Though it can be the bane of any and all types of people, the effects of DOMS does vary from individual to individual and can depend upon your age, athletic conditioning and your skeletal muscular system, as well as being affected by your technique.

Younger athletes will be affected by DOMS because their overall conditioning is not yet fully developed enough to handle heavy and intense training and the inflammatory response of their immune system is more efficient, whereas older athletes, though not lacking in muscle conditioning, are affected by their age, shifting hormonal patterns and a decrease in their recovery responses (believe me, I know).

Does Getting DOMS Mean I am Building More Muscle?

The short answer to that question is – probably not, no.

Though there is a school of thought that believes it may, to some extent, enhance it – particularly if you have been training for a number of years.

There is very little evidence to suggest that ‘damage’ to your muscles is a requirement for muscle growth to occur, but it is believed that there is an optimal amount which will help to enhance the effects of your workout.

That particular sweet spot is very likely to be a constantly shifting target that changes with the amount, intensity and type of exercise that you do. The difficulty that has been found when boffins have studied such things is that an increase in muscle soreness does not necessarily mean that more muscle is being built; conversely, a decrease in soreness does not always mean that less damage has been done to your muscles. Your body just never makes it easy for you (would you want it any other way?).

Can I Combat DOMS?

In all honesty, there isn’t a simple way to treat yourself for DOMS, but as common as it is, it is by no means a necessary evil of exercise. There are a number of different precautions you can take to prevent and shorten the length of time you are affected by it, and, as the old proverb says – “an ounce of prevention is worth a pound of cure”.

In the not too distant past, it was believed that gentle stretching could contribute to reducing exercise related muscle soreness, but in 2007, Australian researchers discovered that stretching is about as useful for preventing DOMS as a shoe salesman is at a snake convention.

There are however a number of ways to reduce the effects and alleviate those ‘I can’t make it up the stairs’ symptoms. A sports massage will help to move blood and fluid around your body and go a long way to healing the trauma in your muscles, depending upon the area and the type of massage administered.

Vitamin C is known to be rather effective at repairing connective tissues and some reports (though many conflicting) do seem to suggest that antioxidant supplements can help to mitigate the effects of onset workout soreness in your muscles.

However, before you go off downing Vitamin C like some scurvy ravaged Jack Sparrow wannabe, large doses are no good for you and in some cases can be very harmful – even leading to kidney stones.

Some other common ways of treating the symptoms of DOMS include contrast showers (alternating between cold and hot water), foam rolling, Epsom salt baths, an increase in protein and omega-3 intake and plenty of sleep. New research has even suggested that supplementing with saffron may even alleviate your symptoms (though how expensive is that going to be?).

In all honesty, the most effective treatment for DOMS is to ensure that you are exercising correctly, starting out new regimes slowly (follow the 10% rule) and avoiding making any sudden changes to the way that you train. If you are serious about what you do, practicing good common sense in your workouts and following simple warm up and cool down routines will go a long way to alleviating the pain of delayed onset muscle soreness.

Stay safe, happy training and don’t get down about your DOMS.