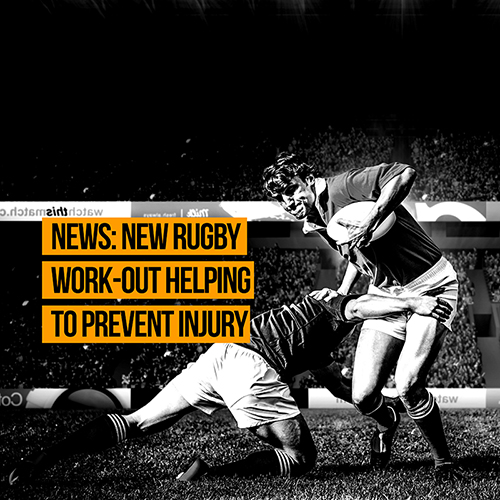 There’s been some interesting news coming out of the rugby world of late.

With increasing concerns over safety within the sport, experts have been searching for ways to improve or lessen the chances of injury.

There may be some good news on the horizon. As a new, specific, 20-minute exercise programme can reduce injuries in teenage rugby players by more than 70%, according to a new study.

The findings are thanks to The University of Bath who say they are excited by the potentially game changing results. So ground-breaking was the outcome, the Rugby Football Union are set to implement the programme across all levels of the community game before next season.

Published in the British Journal of Sports Medicine, researchers found that when players completed the newly designed exercise session at least three times a week, be it before a match or training, that injuries fell by 72%.

A total of 40 schools across the country and 2,500 players aged 14-18 were involved in the study, which also found that concussions were reduced by 59%.

The research team who conducted the study also developed the programme, with the three main areas of focus being balance, strength and agility.

Taking around 20 minutes to complete, the exercise is split in to four stages. These are made up of:

The leader of the RFU-commissioned study, Professor Keith Stokes, believes the numbers, the result of following rugby-playing independent schools for a year, are potentially game-changing.

“Our results are exciting because they show that carrying out a simple set of exercises on a regular basis can substantially reduce injuries in youth rugby,” he said.

“We believe these findings will have a significant impact in helping to improve player welfare, making the game safer for young players to enjoy.”

According to Stokes the secret could be in shifting from the traditional pre-match routines to movements that better aid muscle strengthening around joints such as the knees, as well as promote core stability.

Of the seven schools that managed to complete their exercises three times a week, those doing the new programme saw 72% fewer match injuries and 81% fewer upper limb injuries than other schools.

As well as improved awareness and better tackling technique, the process of building up neck muscles is thought to help reduce the amount of concussions, with the study finding which made up most of the head and neck injuries reported.

Of the total 441 injuries, 168 were head or neck injuries. And Prof Stokes says strengthening neck muscles allows players to better cope with the forces acting on the brain during contact.

“If people are moving better, they can also keep their head out of the way,” he added.

Dr Mike England, the RFU’s Community Rugby medical director, said of the study: “The results are impressive and we hope that a related study showing similar effects in the adult community game will be published soon. The RFU plans to roll out this approach across the community game in England and we will be training our local delivery workforce to help clubs and schools adopt this type of training and realise the potential benefits for players.”

The news follows rule changes within the game early this year, which aim to curb the amount of injuries suffered via high tackles.

Not so much a rule change, World Rugby instituted two new categories for a high tackle, “reckless” and “accidental”, along with some guidelines attempting to nail down exactly what the changes mean.

Which is essentially a ramping up in punishment for reckless tackles, which has a minimum sanction of a yellow and maximum of red, along with increases in the accompanying bans.

While the accidental tackle has a minimum sanction of a penalty and interestingly, no maximum.

The change caused some confusion with many instead desiring a law that lowers the threshold for a high tackle to somewhere on the body such as below chest height.

Concussions have become a huge issue in rugby in recent years and authorities are eager to start facing the issue head on.

With collision sports such as rugby, american football and combat sports on the brink of a crisis when it comes to head injury and long-term damage, programmes such as that developed by The University of Bath could prove invaluable.