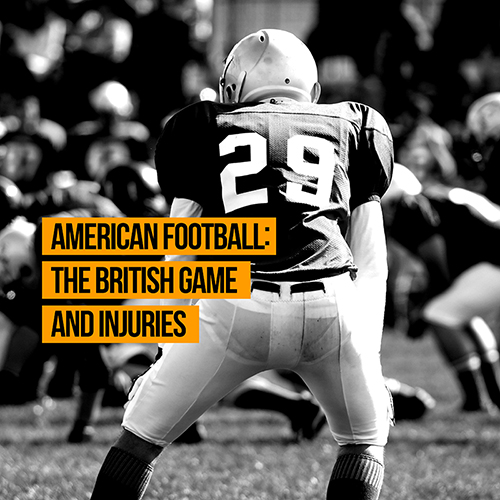 We’ve all seen the National Football League, or NFL. Or if we haven’t we at least know what it is, it’s those giant men, super athletes, crashing in to one another at high velocity and often with bad intentions. But what of our very own UK league?

Here at PhysioRoom.com, we’re always keen to encourage people to get active and try new sports that they’ve never given a go. That’s why we’re going to take a quick glance at our very own American football league.

Introducing the BAFA National Leagues, which are the core, open-to-all format of the British game, and home of the National Championship – the Britbowl.

Last years Britbowl was the 30th edition of the game, with the London Warriors cementing their place at the top of the British American football pyramid with a fourth straight victory over the London Blitz in the showpiece. Can anyone stop the Warriors?

We’ll soon find out as the BAFA National Leagues got back under way recently with 70 teams across three divisions from around the nation donning their pads and helmets and going to war.

The British American football adult contact league is a 10-game league season that runs from April to July with the playoffs taking place in August and early September. A network of regional divisions underpin two Premier Leagues, one northern and one southern. The game is full contact football and teams are mixed sex, with everyone encouraged to get involved.

Here’s the teams competing this year:

With just a few games played, here’s how the standings are shaping up in what will prove to be an exciting season:

Not only is there the adult contact league however. There’s other age groups and other versions of the sport to try out.

Including but not limited too:

Flag is actually the fastest growing format of the game in Great Britain, involving schools, colleges, universities and the community.

It is the non-contact version of American football where tackles are made by pulling off a flag which is attached to every player.

The game retains the same principles as the contact game with the offense having four attempts, or downs, to reach a certain point on the field, with obviously the defence trying to stop them.

For more details about the BAFA National Leagues, check out their website where you can find in depth information on how you can get involved with your local club!

Players who compete in the BAFA League are obviously just as susceptible to injury as those in the NFL. Much like other sports, regardless of the money involved, the human body is still open to the same risks.

That’s why we’re going to take a look at some common injuries that can occur while participating in the old grid iron. We’ll also recommend you some products that might be able to help you prevent injury, or get back on to the field quicker after suffering one.

Knee ligament injuries, which can include the ACL, LCL, MCL and PCL are common injuries in sports that involve changing direction and turning like the NFL. In fact, so stressful on the ligaments are moves like juking, spinning, stopping and starting, moves performed by positions such as running back, that American football players are always at high risk.

An ACL injury can occur in several different ways, most notably by landing from a jump onto a bent knee then twisting, or landing on a knee that is over-extended. In collision sports, direct contact to the knee from opponents can cause an ACL injury

There are several ways you can help prevent and treat a knee ligament injury.

Firstly, it’s recommended during the rehab of a knee ligament injury to use a wobble board or cushion to strengthen the ligament. While true, you can also be pre-emptive and perform balance exercises with a board or cushion in order to lessen the chances of injury to begin with.

Should you suffer one however, a knee support may be required, of which PhysioRoom.com has an option for pretty much any knee injury you can encounter.

To see a more in-depth analysis of the ACL injury, click here.

Concussions are an increasingly common problem in American football, as well as other high-contact sports like rugby. In recent years there has been controversy surrounding ex-NFL players suffering from CTE.

CTE or chronic traumatic encephalopathy is a progressive, degenerative disease which affects the brains of people who have suffered repeated concussions and traumatic head injuries.

Concussion itself is the sudden ut short-lived loss of mental function that occurs after a blow or other injury to the head.

Symptoms can include, loss of consciousness, periods of memory loss, disturbance in vision such as ‘seeing stars’ or blurred vision. What may also be seen I a period of confusions, a blank expression or a delay when responding directly after the head injury.

As for neck injuries, whiplash, wry neck and a slipped disc in the neck are common neck injuries. Neck injury symptoms include neck pain, a stiff neck, neck muscle spasm and referred pain to the arm and fingers. Neck pain and neck injuries are often caused by trauma or poor posture.

As far as concussion goes, there isn’t an incredible amount that can be done once you’ve suffered the injury. You could apply a cold pack to reduce swelling, but most important is rest, both physically and mentally.

This means avoiding activities like physical exertion, sports or any vigorous movements which may increase your symptoms.

The rest also includes activities that require thinking and concentration such as video games, watching tv, schoolwork, reading, texting or using a computer if these activities worsen your symptoms.

As far as whiplash goes, PhysioRoom.com provides several soft collars in our store.

For a detailed breakdown of CTE, check out our CTE blog.

For a detailed breakdown of whiplash and products that could help, click here.

Thumb injuries and broken wrists are common wrist and hand injuries in American football. Wrist and hand injury symptoms include wrist pain, wrist stiffness, wrist weakness and an inability to grip things. Wrist pain and wrist injuries are often caused by a fall onto an out stretched hand when tackled.

For thumb injuries, of which there are several different ones, immobilisation of the thumb using a splint is usually the course of action required.

Wrist injuries and broken wrist rehab would also be helped by the use of a wrist support or splint.

For a detailed breakdown and more products suitable for specific wrist and hand injuries, click here.

The dislocated shoulder is a common injury in heavy contact sports such as American football and rugby. They’re characterised by severe shoulder pain and hospital treatment is required to restore normal shoulder anatomy.

The should joint itself is a ball-and-socket one that has a large range of movement but not a lot of stability, which makes the shoulder prone to a dislocation. The shoulder is particularly unstable when it is rotated outwards and the arm is cocked back or ‘abducted. Any additional force in this position will cause the head of the Humerus(arm) bone to come out of the joint in a forward direction, which is referred to as an anterior dislocation.

The shoulder joint is enclosed by a fibrous capsule which is strengthened by ligaments that provide a reinforced thickening of the capsule. The joint also has a labrum – a fibrocartilage lip that increases the stability of the joint. In the case of a dislocation due to trauma (such as a fall or collision), the joint capsule and ligaments are usually torn, and the labrum may also be damaged.

Once the shoulder has been put back in place it is immobilised using a sling. The sling is kept on for about 2 to 3 weeks, during which time it is important that the elbow, wrist and fingers are kept moving to prevent them stiffening up.

When recovering from a dislocation of the shoulder, the joint will have a degree of instability and will be more likely to dislocate again, or become subluxed (where it moves slightly but not fully out of joint).

This is because the ligaments, capsule and labrum are damaged and cannot restrain the humeral head and prevent dislocation.

Exercises using a resistance band can be very effective at strengthening the rotator cuff and maintaining shoulder stability.

Active rehabilitation is started as soon as possible but overhead arm movement and sporting activity should be avoided for at least 6 weeks.

For further info and products on a dislocated shoulder, click here.