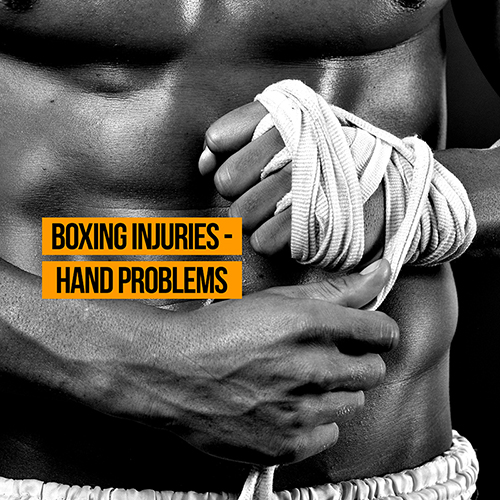 There’s something about the sweet science of boxing that captures the imagination like nothing else. Two people standing across the ring from one another with the sole intention of slamming fists in to each other’s faces. It stiffens the sinews and raises the hair on the back of the neck in a way that only something so primal is capable of.

However, due to the nature of the sport, it is quite common for boxers to experience hand injuries that can cause frustrating implications for the injured fighter. Pretty much every boxer from both the past and modern day have been bugged by at least some minor hand trouble. Such is the price for using body parts as weapons.

That’s why in this blog post we are going to look at a couple of the most common hand injuries that are suffered in boxing, and how PhysioRoom can help you during the aftermath of suffering these injuries in the ring!

A ‘boxers fracture’ is the break of either the fourth or fifth metacarpal, that’s located just below the knuckle. This injury most commonly occurs when punching a firm object, such as your opponent’s skull, with a closed first.

Probably the main reason as to why this injury happens in the ring is a lack of technique. Maintaining the correct punching technique during your bout as much as possible is key to your long-term hand health!

If you suspect that you have suffered a boxers fracture and are experiencing symptoms of pain and swelling, it is important that you seek medical treatment to confirm the break. If the bone is still aligned, then the finger may be immobilised in a cast to allow the bone to heal. If the bone is misaligned however, the finger may need to be set and held in place via a surgical procedure.

For a splint during your rehab period, check out our range of wrist/thumb/finger supports and braces.

In addition to this, another common injury in boxing is Carpal Bossing. Carpal Bossing is when a lump forms on the back of the hand at the junction of the long finger bones and the small wrist bones. This lump comes as a result of the thinning of the articular cartilage lining, which is usually caused by a knock to the back of your wrist.

Ice can be used in between fights or training sessions and can be applied to the hands to help settle inflammation caused by heavy impact, reducing the repeated damage to the tissues. Respite is also a key component in injury prevention, i.e. resting up between workouts/activities, however wearing hand wraps and using 16oz gloves during sparring sessions when possible is also beneficial. For some glove options head over to our boxing glove range.

Examples of Boxers with Hand Troubles

Perhaps the best modern day example of a boxer having trouble with his hands is that of, to some, the greatest of all time, Floyd Mayweather Jr.

Despite Floyd’s stunningly decorated career, he’s had problems with his brittle hands since his days as an amateur, and if you’ve followed his time in boxing, there seemingly hasn’t been a fight before which there hasn’t been rumours about his worrisome hands.

‘Money May’ has changed who wraps his hands several times in his career, first of all he worked with veteran cutman Miguel Diaz at the start of his career.

I the build up to Mayweather’s fight with Manny Pacquiao, Diaz, who was by then working for Pacquiao had some thoughts on Floyds brittle digits.

“He has all the problems in the world with his hands,” said Diaz.

“They all have the same hands, and the same problems,”

“They didn’t have enough calcium as babies. Their bones did not grow strong.”

For years practices to deal with such problems were walking that fine line, with cornermen often using a syringe before the fight and injecting Novocain into their hands.

That of course has stopped due to modern drug guidelines, with Novacain being banned by Nevada state.

It was in 2014 when Mayweather eventually started working with Bob Ware after spending year working with Rafael Garcia, who as then confined to just cut man duties.

Why Mayweather made the switch is a trade secret, but Ware has revealed that he uses extra tape “in certain places”.

But the padding in his wraps is different, and perfect for those with bad hands, Ware saying:

“My pad is different, definitely. It’s a material I get. … It is just gauze and athletic tape, but you can use a couple different things for the pad, and what I use for Floyd, and other people with bad hands, is pretty good.”

Khan perhaps isn’t the most obvious candidate for hand troubles. That was until last year when he revealed that he’d been fighting with a broken hand for an incredible 13 years.

The 30-year-old Bolton native also claimed it stopped him from ever truly unleashing power shots with his right hand.

Last year he underwent surgery which involved taking bone from his hip and grafting it on to his damaged hand, all held together by metal pins.

“I’ve only been punching with 30 or 40 per cent power because it was so bad.” Khan told The Sun.

“I kept the news of my hand injury quiet from everyone. I had to because I didn’t want any of my opponents to know about it, I didn’t want to give away an advantage.

“I didn’t want to go into those fights but I had to do it to become a world champion one day. Since then, I have never really thrown a right hand hard with all my might.

“I know people might question why I didn’t get the operation sooner but I couldn’t – I was too set on chasing my dream to become world champion and I was in big fights.

“I was one of the brightest prospects in the UK, the pressure was on me and I had to fight. I couldn’t afford to take six months off for an operation.

“I had to keep on fighting and keep myself busy. I didn’t want to take a step back because my dream to become world champion would have been delayed.”

Haye doesn’t just have injury trouble with his hands, he’s suffered a number of injuries all over his body that have caused him to either underperform or pull out of fights completely.

In fact, before he lost to Wladimir Klitschko in 2011, afterwards citing a broken toe as the reason for his lacklustre performance, he had already pulled out of the fight once before in 2009 with a hand injury.

But perhaps Haye’s most infamous hand injury came during a fight later that year, a fight in which he brought the WBA Heavyweight Title back to Britain.

Fighting the 7ft 2 inch giant Nikolai Valuev, Haye damaged his hand early in the fight, leaving him at an even further disadvantage.

“I damaged my hand in the second or third round so I couldn’t throw too many right hands so I tried to win it extensively with my left hand.” Haye said after the bout.

“My hand is very tender and very store and that’s why I used it very irregular. I found a strategy. I didn’t train to do that.

“I trained to be more aggressive but I hurt my left hand and I had to take my foot off the gas and win it clever and win rounds, and it worked out.”

A variety of boxing accessories and products at PhysioRoom

At PhysioRoom, we have all the tools to help you prevent suffering injuries to your hands and reach the top of your boxing game.

If you want to stay ahead of the game and keep your hands wrapped up nice and securely, check out our range of boxing wrapping and tapes.

Or to check out all the other products within our boxing range such as gloves and pads, why not head over to our dedicated Boxing & MMA section.