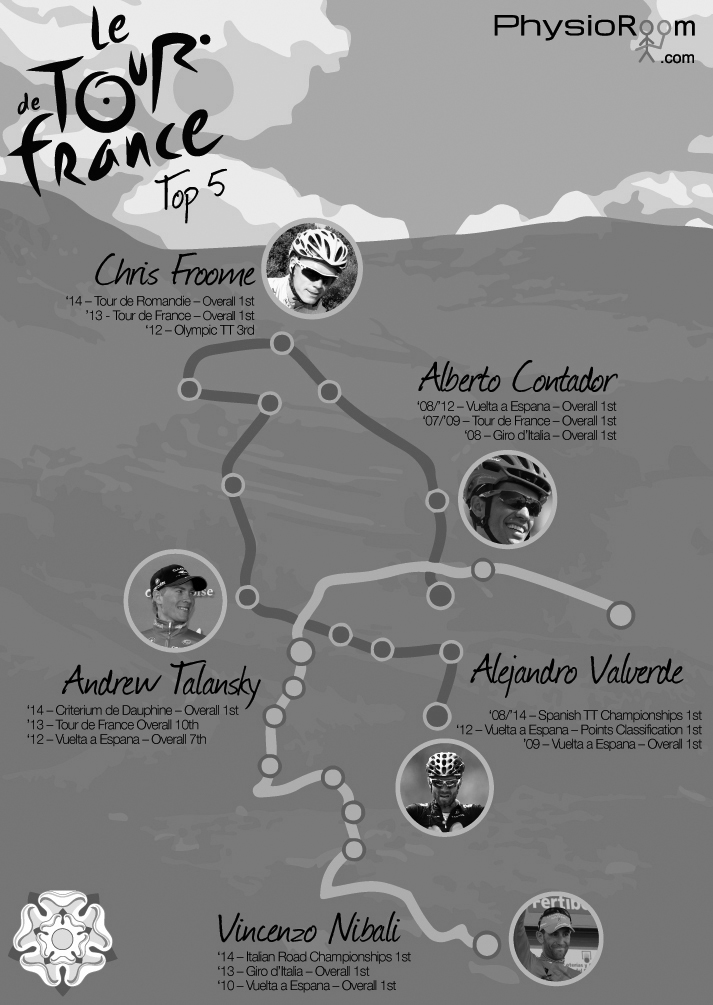 Le Tour de France Рeven the name sounds sexy. As the world’s most popular endurance sport, which regularly amasses global audiences of 3.5billion in over 180 countries, Le Tour has captured the hearts and imaginations of the British public. A nation whose football team has once more led them to nothing more than disappointment. Quelle surprise.

To press matters further, Blighty also has the prestigious accolade of hosting Le Grand Depart, the initial stages which regularly take place outside of the host nation. Whatֳ more, for the first time in Le Tourֳ history, a British rider will defend the title as Team Skyֳ Chris Froome hopes to add another Grand Tour to his rapidly growing palmarг.

There has, as always, been a mountain of controversy in the lead up to the 101st edition of the famous race. From doping scandals to controversial team picks, Le Tour de France 2014 will feel right at home in the soap opera loving north as the drama and scandal of the worldֳ most prestigious cycling race kicks off in Leeds on July 5th.

To celebrate a sport which we are quite frankly in love with, PhysioRoom.com is proud to share with you Le Tour de France Favourites 2014 Рthe riders who we think could snatch the title in Paris.

All odds are accurate as of July 3rd and have been sourced from www.skybet.com. 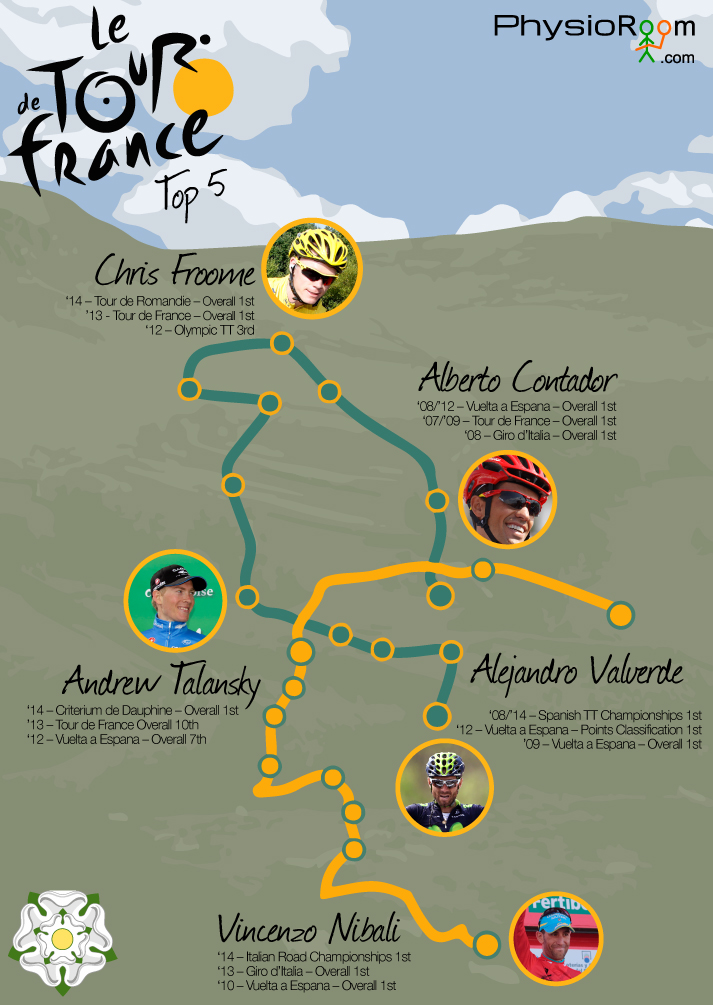 Much has been said about the rivalry between 29-year old Froome and British golden boy Bradley Wiggins over recent years. But one thing that is for sure is that the Kenyan born Froome will be leading Team Sky in his hunt for a second Tour de France Yellow Jersey. Froome starts the race as the firm favourite despite a rocky 2014 and only managing a 12th place in the Criterium du Dauphine. A gnarly crash in the 6th stage of the race – often seen as an indication for the winner of Le Tour – and Wigginsՠstellar performance at The Tour of California led many to believe that the 2012 winner would in fact take part. Team Skyֳ Dave Brailsford the former head coach of British Cycling, opted for a Wiggo free Tour which will see Froome accompanied by some of the strongest riders in the peloton; Australian Richie Porte and Welsh Olympic gold medallist Geraint Thomas to name just a few.

Having recently admitted to the BBC that: “Contador is my biggest contender at this pointӼ/em> Froome will be constantly checking over his shoulder for El Pistolero (The Gunman) who is the bookmakers close second. The 31-year old rider has a host of Grand Tour palmarг including two Tour de France victories, two at the Vuelta a Espana and one Giro d։talia. Having tested positive for banned substance Clenbutarol in 2010, Contador lost victories in both Le Tour in 2010 and the Giro in 2011 Рa bone of contention amongst cycling fans due to the possibility of the result stemming from contaminated meat.[1] The Team Tinkoff-Saxo rider will no doubt be hoping to silence his critics and claim back what some believe should have rightly been his before. Contador leads another strong team which contains Vuelta a Espana 5th place Nicolas Roche of Ireland and three-time World Time-Trial Champion Michael Rogers of Australia.[2]

Having controversially omitted Scottish cyclist David Millar in what would be his last Tour, Garmin-Sharp are aiming for the podium with American Andrew Talansky who managed to steer his team to a 10th place in 2013. The young American has already had massive successes in his short career including taking home the Yellow Jersey at the Criterium du Dauphine in mid-June this year, having snatched the lead from Alberto Contador in the final stage. Talanksyֳ team includes the brilliantly named Tour of Qatar stage winner Jack Bauer and Paris-Nice double stage winner Tom-Jelte Slagter.[3]

La Squalo (The Shark) is one of the most decorated riders in the peloton this year. With eight top ten results in the Grand tours over the last five years, the 29-year old Sicilian will hope to build on his Tour de France success of 2012 where he finished 3rd behind Wiggins and Froome. The winner of the 2013 Giro and current leader of Astana has a frankly excellent team at his disposal including veteran rider Alessandro Vanotti and Time Trial specialist Dmitriy Gruzdev and will hope to utilise his team which is armed with riders of all disciplines, to make an attack on the top two this July.

With the drama at Team Sky overshadowing most of the preliminary races in recent months, Garmin-Sharp and Tinkoff-Saxo have armed themselves with what could very well be world beating teams in France. With a route that has been designed for fast attacks and exciting mountain stages, the winner will be the one who survives not only the climbs of mainland Europe but those of Blighty also. Froome may be the defending champion, but the 29-year old will be up against a hungry youngster in Talansky, decorated stage winner Nibali, Grand Tour veteran Valverde and the exceptionally experienced El Pistolero.

With seemingly endless palmarг including victories at all three Grande Tours, two Tour de France victories, two Vueltaֳ and a Giro, not to mention the unrest at Team Sky, the smart money˩s on Contador this July.

But hell, this is Le Tour – ˥xpect the unexpected.