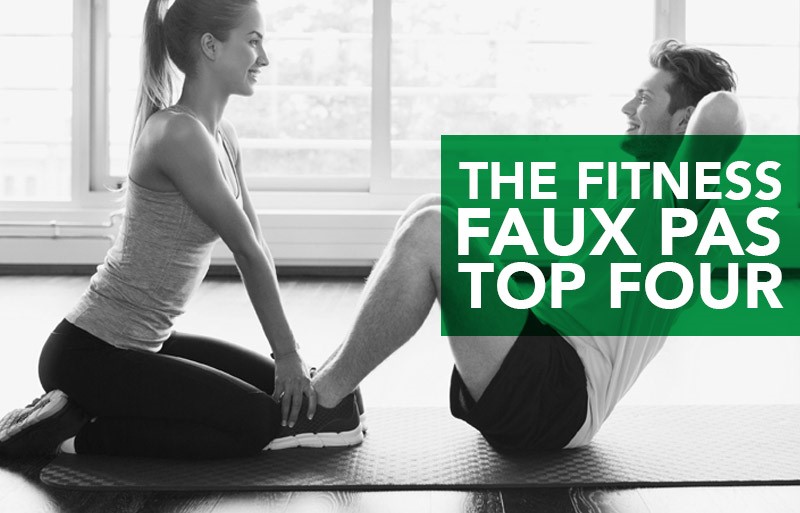 How do some people still get it wrong? Toby Cryne asks this question every single day. This weeks’ examination of fitness faux pas examines the top five worst gym exercises you can do, why they are so terrible and what you can do instead.

One would like to think that in this day and age with all information known to mankind available at the mere click of a button, exercise faux pas would be a thing of the past. Sadly however, this is not the case.

Though the fitness community has come on leaps and bounds since the overtly rhetoric filled infomercials of the 80’s and 90’s, (if you do nothing else today, watch the linked video. It’s hilarious.) it seems that many gym goers still flock to certain exercises or pieces of equipment expecting exceptional results. The end result however, can be anything but.

A recent hold up at the squat rack found me eying to seemingly experience fitness enthusiasts as they each performed shoddy exercises. To my right a musky looking chap performing the worst form of good mornings I had ever seen and to my left another performing lat pull downs in front of his chest.

Which got me thinking, what are the worst fitness faux pas out there? Why are they so terrible and how can you resolve the situation before you do yourself some serious damage?

The Kipping Pull Up

What is it? The Kipping Pull Up, known to many as the Crossfit pull up is quite possibly one of the most ridiculous things I have ever seen and is not, I repeat NOT a pull up. It is probably the worst fitness faux pas of them all. It all starts in the right way with a wide grip positioning on the bar. Yet somewhere along the way the practitioner will use their feet in a dolphin like motion to create momentum to power them up to the bar. Its very fish out of water in its display and is frankly ridiculous.

Why is it bad? Commonly seen in the Crossfit community, which lauds number of reps as the highest priority, the Kipping Pull Up can be exceptionally hazardous to the rotator cuff ligaments in the shoulder due to the snap and release mechanism that one forces the body to engage. A truly terrible exercise, anyone caught digit checking this exercise as an accurate depiction of how many pull ups they can do needs to be quickly schooled. If this is you then please, for everyone’s sanity stop.

What should you do instead? A real pull up like this:

What is it? The Roman or Captains Chair is a commonly found instrument that often comes embedded within a pull up station. On the surface it looks like a pretty good exercise station for performing abdominal exercises but sadly, it’s not.

Why it’s bad? The Roman Chair will not develop your abs anymore than a portion of curly fries, what with it being a hip flexor isolation station and all. Worse still are common users technical flaws which can severely damage the hip flexors if one is not careful, and I know I’ve been there. The legs are the heaviest limbs of all and contain the largest set of muscle groups in the body. It stands to reason then that projecting them upwards with horrendous form and a focus on speed (which is something I always see) is going to do nothing but damage to your core.

What should you do instead?

For a focused abdominal exercise that doesn’t involve constantly moving your head up and down try the plank and for focused hip flexor strength training check out the video below.

Your legs can thank me later.

What are they? The idea behind the machine leg curl was probably a good one to start off with. A focused, targeted muscle builder for the large groups of the quadriceps, the contraption is often found littered around near those ridiculous looking 80’s throwback machines which no one knows quite how to use.

Why are they bad? The quadriceps is proportionally huge when compared to the surrounding muscles and herein lies the problem. Whereas functional exercises such as squats will develop whole leg strength and size, the machine leg curl is tasked with developing an already grossly misrepresented muscle group into a behemoth. This can create pressure behind the knee and exceptional strain on the hamstrings.

What should you do instead? Squats, plain and simple squats. They are a functional exercise, replicate a real life activity and develop all muscle groups in the leg, the core and even the upper body. Do squats my friend. Disclaimer: The machine leg curl is a fantastic aid for rehabilitation following some form of trauma to the quadriceps or hamstrings.

What is it? A gym room standard since seemingly the dawn of time, the common sit-up and its many variations are often the only factor in many ab workout routines. Expect to see classes of eager exercises in yoga pants and tighty whiteys cranking out hundreds of these each morning.

Why are they bad? Neck injuries are a common complaint of many sit-up practitioners but it is not this factor that causes me to lose sleep. No, it’s the fact that the sit-up is pretty much regarded as the most useless exercise for developing a strong core and a balanced set of abdominals. In contrast to popular belief, a six-pack is not made lying on your back, it’s made in the kitchen and on the treadmill.

What should you do instead? Any exercise that engages the core such as squats, deadlifts and the plank will help to develop the core. Try to get out of the habit of thinking about just the six-pack abdominals and think more about core development as a whole.

What are your top fitness faux pas? Give us a hoot on Twitter and let us know!