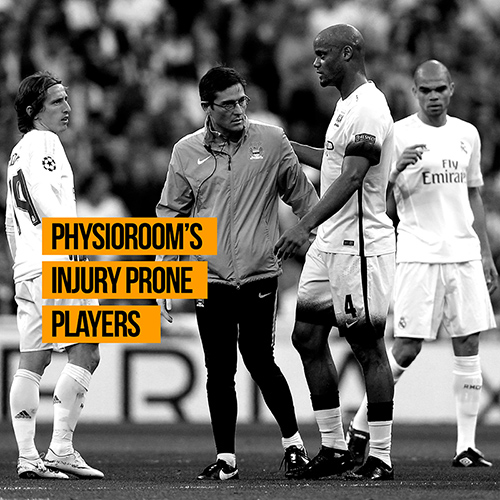 Today’s PhysioRoom blog is going to look at some of the most injury prone players since our records began.

These unlucky souls are regular fixtures on our Injury Table, be it dipping in and out with multiple niggles and knocks, or long term stays due to serious injuries.

Fresh off the back of a Carabao Cup victory in which he scored, it makes you almost feel bad to bring the conversation back to injuries for the Belgian, but prior to that final and throughout this season he was once again having trouble with injuries.

Of his 43 injuries recorded, a whopping 17 have been calf strains, an injury that has plagued the defender for years now.

City have been unable to regularly call on their captain, especially during Pep Guardiola’s reign. That has meant that one of, admittedly very few, potential chinks in the armour of the Spaniard’s team has remained.

Here’s hoping the 31-year-old can play out his dwindling years at the top of the game comparatively injury free, as when he’s fit, he’s still one of the best centre-backs around.

Andy Carroll is well known as one of the most injury prone players in the league. The Geordie is one of those strange players whose reputation seems to enhance with each game they miss.

There comes a time in games when you just need someone to throw it forward too and when Carroll isn’t there to play that role, his legend grows.

That’s not to say the former Liverpool and Newcastle man isn’t an extremely effective striker when fit, if you play to his strengths.

There’s a reason West Ham, and more notably Liverpool, were willing to pay so much money for him.

Ankle and groin problems have been most troublesome for Carroll, but at 29-years-old, there’s still some hope he can salvage some significant playing time going forward.

Daniel Sturridge’s injury plight came back in to sharp focus last month after he was injured after just four minutes in to his third game for Alan Pardew’s West Brom.

That hamstring injury now looks set to keep him out for up to a month (since occurrence), having initially been forecast for a couple of weeks.

The injury almost encapsulated the striker’s rotten luck with injury over the years, which has seen him injured 48 times, with 31 of those coming since he joined Liverpool in 2013.

A persistent hip injury has been the most consistent complaint that has dogged the 28-year-old since he made the switch to Merseyside.

The trouble for Jack Wilshere has always seemed to be, that when he does get injured, it’s usually something significant.

Wilshere’s determination to overcome these injuries has seen him return and have decent spells of playing time, first at Bournemouth last season, and now during this campaign back at Arsenal.

The 26-year-old has managed such a resurgence in his career at the North London club that fans have all but forgotten his ankle troubles and now consider him signing a new contract to be one of the boards top priorities. (We don’t need to mention the others)

The fact Phil Jones is currently out injured with a ‘knock’ is actually the outlier in a mostly injury-free season in 2017/18.

The Preston-born defender has managed to somewhat shake off his injury-prone title this campaign having suffered only a few minor injuries while playing a big part in Jose Mourinho’s defence.

With that said, in the past Jones has been a good example of a player who doesn’t really have an ongoing problem with something specific, but is just prone to picking up niggles anywhere on the body.

Some have questioned whether his all action, often lunging, playing style has contributed to his woes over the years, but the 26-year-old seems to be on the way to changing that particular weakness.