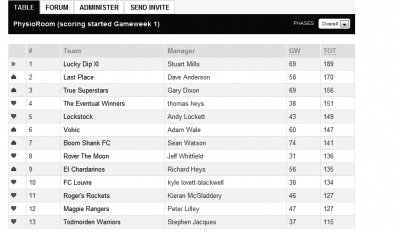 At PhysioRoom.com we have a Fantasy Football league running for those who work here. As things are starting to settle down in the league. I thought I֤ blog about it plus the logic behind my inept transfers and team selections.

At the top of our league sits PhysioRoom Brand Manager Stuart Mills. Helped along by Wayne Rooneyֳ hat -trick against Arsenal and an inspired choice of Jose Bosingwa as captain. He scored 69 points this week.

The strongest team in the league (bottom of the league holding everyone up) is Stephen Jacques. Heֳ a Liverpool fan which I think explains a lot. The fact that he played 5 in defence who scored him a whole 9 points didnִ help him out. He also had Wojciech Sczcesny as his Goalkeeper…ouch!

Sean Watsonֳ Boom Shank FC (he is as random as his team name suggests and sports a moustache tattoo on his neck) was the highest points scoring team this week with a whopping 74 points. Wayne Rooney was his captain scoring him 38 points. He also had in WolvesՠStephen Ward who seems to be an astute choice scoring him 9 points this week and 26 points in total from 3 weeks.

Special mention goes to our Managing Director Peter Lilley whoֳ an ӥxpertӠat Fantasy Football. Heֳ a lofty 12th place out of 13. He must be rueing having Shay Given and Richard Dunne sitting on his bench with 12 points between them.

I֭ one of those Fantasy Football preachers. I will tell anyone who֬l listen about my transfers and how they֬l rocket me to the top of the league. You֬l notice I֭ 6th (see league table at the bottom) and this is for a very good reason, I make awful choices in my team I considered having Jose Bosingwa as my captain but eventually opted for….Fernando Torres.

At home to newly promoted Norwich surely he had to get on the scoresheet. He scored an almighty 2 points!!! Luckily I had Ashley Young in my team who scored an almighty 23 points to bail me out. As my team stayed injury free this week I decided against making any transfers. You֬l notice from my future blogs that the transfers will be full of logic, but will never ever work out.

Once again, thank you Mr. Fernando Torres. I suggest you add him to your team for the next gameweek, as I֬l be tranferring him right out of my team so heֳ guaranteed to score. I also recommend you check out PhysioRoom.comֳ Injury Premier League table before you make any transfers. 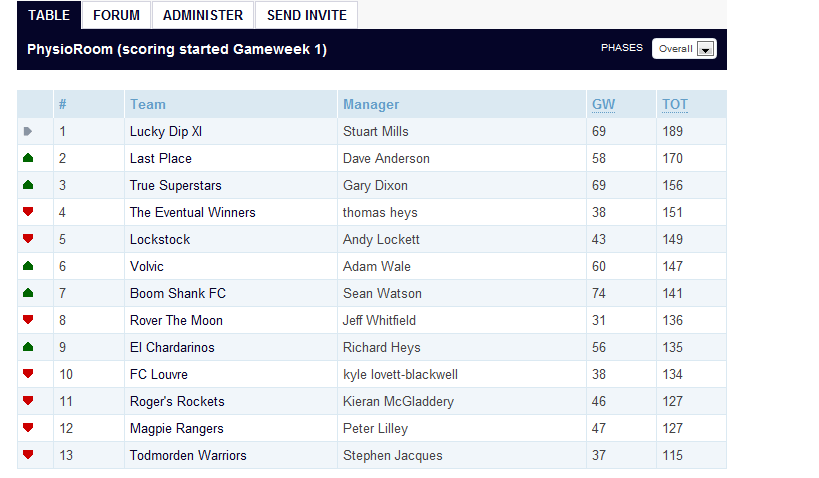