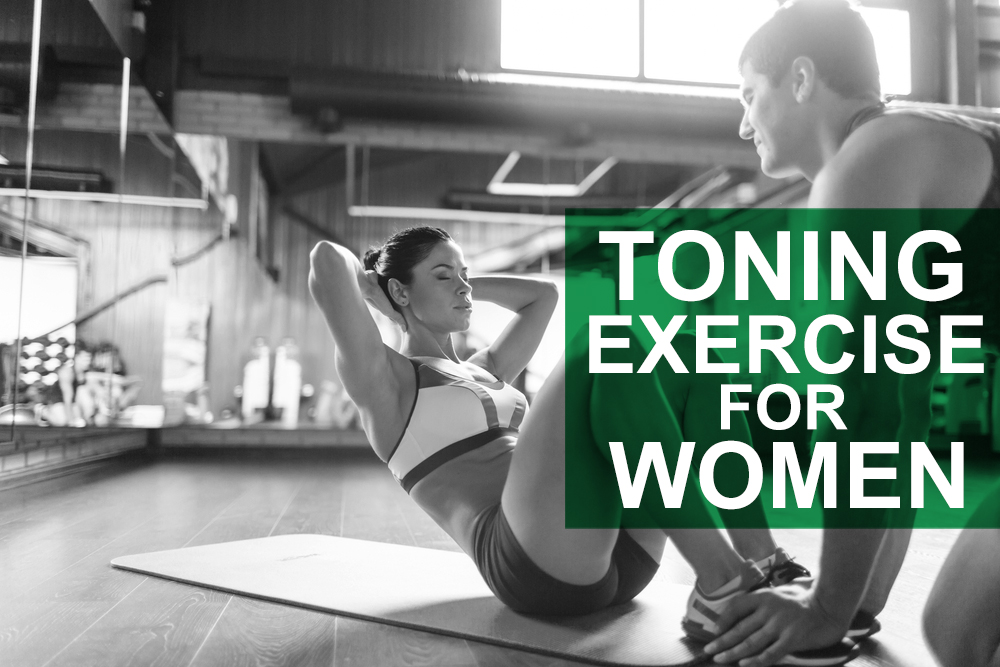 If the above title didn’t have you ROFLCOPTERing your way around the office, PhysioRoom.com needs to educate you a little! One can only imagine the evil genius who first stylised this now infamous buzz word phrase feasts only the blood of his prey – with a Chianti chaser.

It’s seen everywhere from Women’s Health to Heat Magazine implying that the perfect state of toned equilibrium is achieved by endless exercises best described as fat-busting and most appropriately described as useless.

Don’t believe us? Maybe you’ll believe these two instead?

Toning exercises for women are generally thought of as exercises to achieve a high muscle to fat ratio. Gaining more muscle mass (if only a little) and holding less fat are the keys to having the defined, toned look. But if the idea of building muscle just had you running for the crawl space behind the sofa, fear not. The truth is that whilst high rep toning exercises are promoted as aiding fat loss what they really are doing is raising the heart rate. It’s basically cardio – lite. Otherwise known as a waste of time. In truth, lifting light weights for high reps is going to at best burn a few hundred calories in an hour – and you would have to lift an awful lot. Sitting on the floor and doing leg bends for a thousand repetitions just isn’t going to cut it I’m afraid.

We have unfortunately been tricked into thinking that muscle weighs more than fat, but the reality is, a kg is a kg. The real difference however is in the density of the two. Muscle is around 18% more dense than fat – therefore a kg of muscle will take up 18% less space on the body than a kg of fat. Still with us? Muscle fibre, due in part to its larger density, requires more calories to maintain function than fat at rest. Simply, a 60kg person with 10% body fat will require more calories to function than a 60kg person with 20% body fat. So, by performing strength training alongside cardiovascular exercise and increasing muscle density in the body – you will burn more calories over all.

Better pick up that barbell.

Problem #2 – You think that building muscle means getting bigger

The truth is, every time you climb up a steep set of stairs you’re building muscle. In fact, every day your body breaks down and resynthesizes muscle tissue. It’s been doing it all your life! Perhaps the biggest misconception in the fitness industry is that if you lift weights you will get bulky – which is just simply not true. Muscle growth, like fat, requires an excess of calories in order to be created. So unless you are consuming a vast amount of calories more than you need in a day, you will not put on a large amount of muscle size no matter how many reps you pump.

Weight training doesn’t have to mean grunting, snarling and generally impersonating 80’s movie stars. Resistance training can come in many forms and unlike fat loss which cannot be targeted, muscle growth can![2] Want a firmer bum? Be prepared to squat! Circuit Training, Boxercise, HIIT and Insanity are all fantastic resistance based activities for the whole body. For those not willing to share smelly gloves check out the Century 10oz Gloves at GymRoom.com.

One of the key sales factors in the health and fitness industry is the above notion. In 21st century Western Society we are used to instant gratification and as such, require instant results. Sadly, though phrases like “you too can build the body you want with minimal effort – in only a week!” are more than a little familiar, they are simply based on lies. These ridiculous claims fill magazines and supplement headings across the health and fitness world, from women to men but the reality is that, as your Granny probably said; if something sounds too good to be true, it probably is. The biggest secret of the health and fitness industry is this; weight loss is about calories in vs calories out. One pound of muscle holds (roughly) 3,500kcal of energy and in order to lose that pound you’re going to have to burn 3,500kcal more than you normally would or diet to consume less overall kcal. The most steadfast way to do this is to lose 500 calories a day from your current diet for 1lb a week! Naturally combining exercise and diet will yield the best results for your body and your mind.

In short, eat less and exercise more. Ain’t it funny how the old trends always come back around?

Often when people start workout regimes they stick to it militantly before nose diving off the rails in spectacular fashion. They either diet too hard or train to hard. And where does that get you? Usually in a ball on the sofa binging on Oreo biscuits and chocolate milk shake. And why? Because you set the bar too high, too soon.

By making small changes to the daily diet such as replacing a sandwich for a salad and cutting back on processed foods, the toils of dieting will become far simpler. Fancy a chocolate bar? Having one or two a week is better than binging on 10 over the weekend and starting again on Monday. Allowing yourself a little bit of what you want from time to time makes the whole process far more tolerable – for you and those around you.

Exercising within both your physical and mental means is the best way to go forward. Though studies have shown that low intensity cardiovascular exercise may burn more fat per hour than just about anything else, unless you’re training for a marathon (or more) long slow jogs are inefficient with regards to time.

Within the often hyped fat burning zone (low intensity cardio), the body gets about 50% of its overall calories from fat, whilst at high intensities (HIIT/circuits etc) it burns only around 35%. A winning case for steady state cardio? Not exactly, no. Though a person may burn 800kcal per hour running steadily at 6mph (around 400kcal coming from fat), by increasing the speed, intensity and variability of the exercise they would actually burn a lot more calories over all. Simply, 35% of a much higher figure will equate to more net calories burned.

A winning case for HIIT and Circuits then? Sorry but again, no. Due to the higher metabolic demand of high intensity training, the body will require longer to recover between workouts. What’s the point in burning 1000kcal in a workout if you can only do it once a week?

The winning workout regime is one that combines both HIIT style training, resistance training and steady state cardiovascular exercise to turn you into a fat burning machine. Keeping your heart rate in the fat burning zone (below 70% of its maximal capacity) during steady state cardiovascular training is imperative to your success. For best results use a heart rate monitor such as the Motus ECG.

And remember; train smart, not hard!