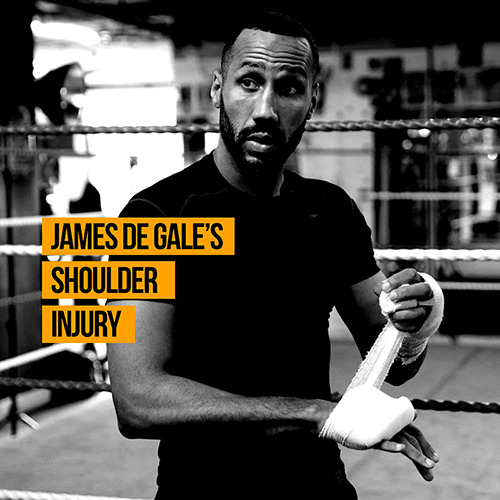 One of Britain’s brightest boxing talents gets the chance to get back on track this this Saturday as former British gold medallist James DeGale takes on American Caleb Truax.

The boxing world hasn’t seen De Gale since his fight with Badou Jack back in January, which ended in a majority draw and saw revelations post-fight of a troublesome rotator cuff injury that had been hampering the now 31-year-old through his previous few fights.

The shoulder injury snatched away the chance to compete in the World Boxing Super Series, which sees eight-fighters compete in a knockout-style tournament. A bracket that includes old rival George Groves and Chris Eubank Jr, two fighters who face off in February, and both of whom will remain on the Londoners radar as he continues his long-term return.

The Super-middleweight IBF World Champion was already suffering with a rotator cuff problem before the Jack fight at the start of 2017, and remarked how his shoulder was ‘gone’ during the bout, the problem only having revealed itself after the journey to the USA for training camp.

That, the eventual draw and the knocking out of a bridge on his upper teeth all combined to make it a stressful night for the 23-1-1 fighter.

“Against Jack my shoulder was totally gone,” De Gale is quoted as saying by The Guardian.

“When I went to see the surgeon afterwards I had a 180 degree tear around the shoulder, my AC joint needed stabilising and my rotator cuff was torn. They went in keyhole, slit me open and found my shoulder was mashed.”

An unfortunate outcome for someone with a profession that relies on the shoulder to keep the arm aloft, but it did give an interesting insight in to the rehab process.

“I was doubting myself, thinking ‘am I going to get better?’,” DeGale added.

“Only after about three months did it start getting better. I couldn’t lift my arm at first, or button a shirt up.

“This is the longest period I’ve ever had off, 11 months by the time I fight, and it’s been frustrating, coming off the draw against Badou Jack in Brooklyn, having surgeries on my nose and shoulder, then a long road back with physio and healing up.

“The right shoulder is vital, being the one with which the southpaw employs his fast, and very effective, jab, which remains the cornerstone of his work.”

Now that he’s back where he belongs, under the lights of the pre-fight press conferences and the ring itself, the Hammersmith native is raring to go.

“You’re going to see a serious difference against Truax. In this fight I’m going to come out and go jab, jab, jab, hook, hooking off the jab. I’m going to put six-punch combos together. You’ll see I’m really back to my finest.

“I’ve only been punching with my right arm for about eight weeks. It’s healed, it’s strong, it’s still a little bit stiff, I’m not going to lie. But there’s no pain. I can throw a jab and I can throw a hook off the jab. It’s great.”

Before we go, let’s take a look at what exactly a rotator cuff injury is…

A Rotator Cuff injury is a common cause of shoulder pain. Injury to the Rotator Cuff will usually begin as inflammation, often referred to as Rotator Cuff tendonitis. The Rotator Cuff muscles (Subscapularis, Supraspinatus, Infraspinatus and Teres minor) are small muscles situated around the shoulder joint. Although they have individual actions, their main role is to work together to stabilise the humeral head (ball) in the shoulder socket.

People are often told that they have injured one particular Rotator Cuff muscle or tendon, with the most common diagnosis being Supraspinatus tendonitis. However, it is unlikely that the problem is with just one of the muscles in isolation. The world’s top shoulder surgeons refer to such conditions as a ‘rotator cuff injury’ and consider the picture as a whole.

Although the Rotator Cuff can be injured by a single traumatic incident, this is not common. Injury to the Rotator Cuff will usually begin as inflammation (tendonitis) caused by some form of micro trauma (a small but continuous source of irritation). If the cause of the inflammation is not addressed, and continues over a long period of time, partial tears may develop in the cuff that could eventually become complete tears (a tear all the way through one or more of the rotator cuff muscles).

Today is 8 weeks post surgery. I’m staying on top of my rehab & the shoulder is improving everyday. Looking forward to getting the gloves back on very soon 💪🏽😬

There are three main causes of micro trauma to the rotator cuff:

Symptoms of Rotator Cuff injury include weakness, loss of full movement and shoulder pain. The amount of pain will depend on the extent of the injury. Patients with early-stage inflammation may only have pain with overhead activities, while those with a Rotator Cuff tear may not be able to sleep because of the pain.

Cleared by the physio to gently start lifting weights again! Still on course for a December return 🙏🏽👊🏽 @nickpalma86 @robmaddenpt

Physiotherapists have a number of physical tests designed to diagnose the presence and severity of Rotator Cuff injury. It is also important to look for signs of shoulder instability. X-rays can give clues as to the presence of a rotator cuff injury but an MRI scan is the investigation method of choice to determine whether a tear is present. An ultrasound scan may be just as effective if carried out by an experienced sonographer .

Tears of the Rotator Cuff are best treated by surgical repair. Physiotherapy is often effective in treating acute (short-term) inflammation and chronic (long-term) degeneration of the cuff where a tear is not present. The first aim of treatment is to reduce the amount of inflammation using ice therapy (never apply ice directly to the skin) and anti-inflammatory medication prescribed by a doctor. Anti-Inflammatory Gel may be more appropriate where anti-inflammatory tablets are not well tolerated. For those who want to continue with sports and work activities a neoprene shoulder support can provide support and reassurance.