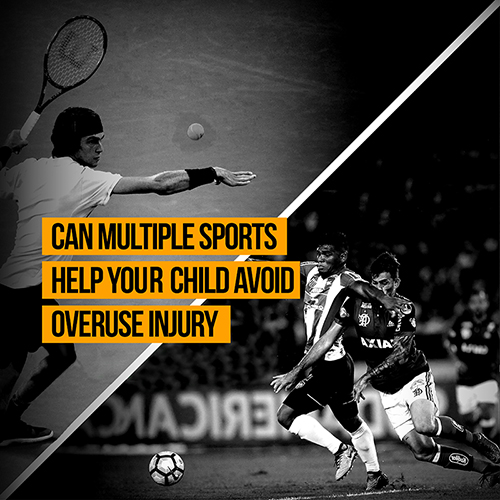 So…in the US, they have these things called ‘multi-sport athletes’. Oh? You mean like when Michael Jordan guy tried to play baseball and was rubbish?

Sort of. We’re more talking about how kids will play multiple sports as children before specialising in one as they get to high school or college. Ah, I see, why do they specialise?

Because they, or maybe their parents, think it’s the best chance they have of becoming an elite athlete in that sport, think LeBron James quitting American Football in high school to focus on Basketball. Oh right, I suppose that’s sensible, whoever he is!

Quite, but the problem is, people are concerned that kids are specialising too early, which is leading to overuse injuries. That’s not good. Why’s that?

Well, the theory goes that limiting the body to specific movements and performing them over and over again puts pressure on the tendons and bones involved. Makes sense, after all, variety is the spice of life!

Err…yeah, exactly. It’s especially bad for adolescents, as they’re more susceptible to overuse injuries due to their still developing bodies. I think I knew that. That’s why they have trouble with growth spurts and injuries…?

Something like that. In a developing human, muscles and tendons are stronger than the bones themselves, so overuse injuries can cause problems with the growth plate, leading to long-term problems down the road. Sounds nasty, got any proof of this here phenomenon?

Yes, actually. A 2013 study came to the conclusion that adolescents that spend more hours per week than their age playing a single sport were 70% more likely to suffer from an overuse injury than any other kind, such as an impact injury. So a 15-year-old shouldn’t really be playing 16 hours of one sport every week?

You’ve got it! And not only that, a different study showed that kids who play one single sport for eight months out of the year are nearly three times more likely to experience an overuse hip and/or knee injury. Sounds conclusive, so how does that affect us in the UK?

Well as you know, here in the UK we somewhat have a culture of singular sporting pursuits unless it’s in PE class. You tend to play one extra-curricular sport and stick with it, be it football, rugby, cricket etc. True, true. Right then Mr.Info, what exactly can we do about it?

There’s the age to hours rule we touched on, as well getting regular periods of rest. But the important thing is to mix it up and fill your child’s time with multiple sports. So, you don’t want them doing another sport on top of their normal activities?

No! The idea is to reduce the one sport they play and replace it with another sport or exercise that primarily uses different muscles, in order to allow the increasingly overused ones to rest a little. Gotcha. Just like when Ryan Giggs started going on about how Yoga helped extend his career a few years back?

Yoga is a great example, actually. It helps stretch and use all of your muscles as well as helping recovery. Yeah, but my 12-year-old isn’t going to do yoga.

Right you are. But the concept is simple, if they play football, try throwing in some tennis or squash or something like that. That makes sense, thanks for saving my child from a future of pain and misery!