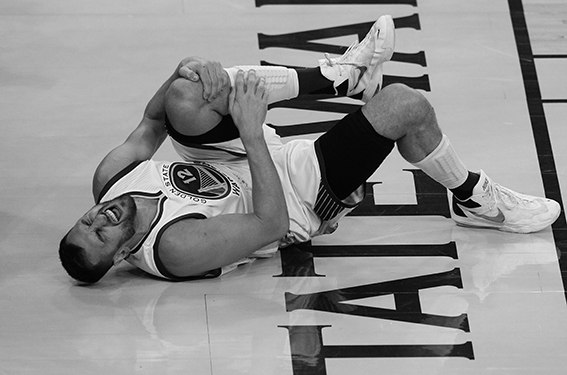 In the wake of West Hamֳ Enner Valencia standing on a cup and injuring himself, we have looked into some of the most ridiculous self-inflicted injuries ever seen in the often amazingly daft, dangerous and downright dim-witted world of professional sport.

Itֳ perfectly understandable, and indeed only natural, for you to be over-excited after scoring your first goal in professional football, but itֳ sometimes best to just go all Ղalotelliռ/a>, stand as still as you can, look around in a faux-menacing way and soak up the plaudits and the occasion.

Somebody should have perhaps pointed that out to Brazilian footballer Maurides, who did a rather poor impression of British gymnastics legend Beth Tweddle following his debut goal for Internacional back in 2013.

After scoring in the 89th minute to put his side 3-1 up in a Copa do Brasil match, the 19-year-old did a running backflip that ended in him rupturing his ACL and spending months on the sidelines; and no, I havenִ heard of him since either.

Speaking from personal experience (itֳ my favoured position), goalkeepers are generally a loud-mouthed bunch of failed outfield players who take out their ineptitude outside the box on everyone within earshot, at any time, as loudly as they want.

But this innate ability to communicate with their fellow professionals turned into an injury nightmare back in 1975 for the then Manchester United goalkeeper Stepney, who shouted so loudly and aggressively at his teammates that he dislocated his own jaw!

Admittedly, he was struck in the face by an opponent prior to giving himself the injury, and his jaw was visibly swollen by the collision, but still, it was either incredibly hard or exceedingly stupid of him to assume that he could just carry on ranting with a severely damaged and distended mandible. But then goalkeepers aren’t too bright, I mean, look at me!

3 – Paulo da Cruz Diogo : If he liked it then he should ‘NOT’ have kept the ring on it!

In an excruciatingly painful example to all players who РA) run into the crowd to celebrate and B) wear jewellery on the field of play, Diogo has suffered the misfortune of never being able to wear his wedding ring ever again.

In 2004, whilst playing for Geneva-based Servette FC, Diogo laid on an assist for Jean Beausejour (formerly of Birmingham City & Wigan Athletic) to score an 89th minute goal and then celebrated by leaping into the crowd to join the ecstatic fans.

Little did he know that as he landed into the crowd his wedding ring was caught on the fence and, as he leapt back on to the field of play, his ring and the majority of his finger were ripped off his hand. Sore!

To add a stunning insult to this shocking injury, the referee duly played it by the book and gave the Swiss midfielder a yellow card for excessive celebration and time wasting. I personally donִ know what would hurt more, but it should serve as a stark warning to anyone who is daft enough to wear a ring on a football field in the future.

Though having not graced the heights of the WWE since last century, Waltman still manages to get in the ճquared-circleՠevery once in a while out on the independent wrestling circuit.

Best known for his rather ridiculous (and often quite vulgar) finishing move РԼa href=”http://prowrestling.wikia.com/wiki/Bronco_Buster” target=”_blank”>The Bronco BusterՠРwhere he runs hard at his opponents as they lean against the corner of the ring, before leaping up to rub his crotch in their face and then riding them like a Bronco, the ‘artist’ formerly known as the 1-2-3 Kid was recently hospitalised after his opponent moved out of the way causing Waltman to collide with the ring post and have an unfortunate accident.

No big deal you might think, this is wrestling, and itֳ all staged.

X-Pac had actually ripped his own anus so badly that it would not stop bleeding, requiring the 40-year-old to have an emergency ‘sphincteroplasty’ Рwhich in all honesty sounds like a truly horrifying experience. Say it with me now: ұ-2-3 РOUCH!Ԝn

Having been suffering with a rather nasty blood blister under his big toe nail the then Aston Villa striker took it upon himself to administer his own form of DIY treatment, instead of consulting his club doctor (stupid or what).

Taking the չou can do it if you B&Q itՠapproach to a whole new level of ridiculousness, Darius committed possibly the most idiotic and unbelievable act of self-mutilation in the history of professional football when he plugged in a power drill and proceeded to drill into his toe nail in an effort to drain the fluid and release the pressure.

Needless to say, this didnִ work at all (what did he expect?) and Vassell contracted a blood infection that saw him have to have the entire nail removed, missing a number of crucial games for Villa in the process. His manager, the one and only Graham Taylor, Լa href=”http://www.bbc.co.uk/sport/0/football/24354888″ target=”_blank”>did not like thatծ

This is just a small selection of ridiculous sports injuries, we are sure there are hundreds more. If you know of any, or have any tales about your own ridiculous self -inflicted injuries, send us a message or post us a link on Twitter or Facebook.

Surely you’ve not been as stupid as this lot! Have you?