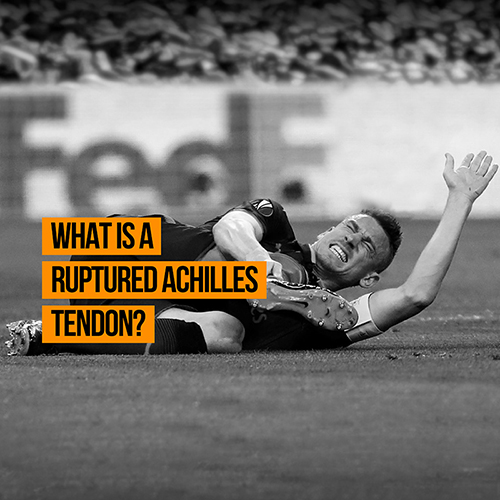 Last Thursday Laurent Koscielny faced what must have seemed like an inevitable blow given his last few years of injury woes, a ruptured achilles tendon.

Though still, when playing in the Europa League semi-final against Atletico Madrid, the Frenchman looked behind him to see who had kicked out at the back of his heel and caused the impact that caused him to eventually fall to the floor.

The sad truth was, however, that there was no contact at all, the defender had simply, finally, put too much strain on to his long-term Achilles problem.

In that moment, the tendon detached completely from it’s fixing point, otherwise unknown as a ruptured Achilles tendon.

If you’ve kept an eye on our injury table over the years, the words ‘Koscielny’ and ‘Achilles’ may be forever forged together in your mind, as he’s been no stranger, having nursed a chronic problem in the tendon for years.

So what exactly is a ‘ruptured Achilles tendon’?

Allow us to enlighten you…

What is a Ruptured Achilles Tendon?

A ruptured Achilles tendon occurs when you tear the tissue that connects your calf muscle to your heel bone. A complete or even partial tear can be considered a rupture. This makes your ankle feel weak and makes it difficult to walk.

After the 32-year-old suffered the injury you could obviously see he had trouble walking, and look closer and we can see exactly how. Virtually unable to lift his back heel, Koscielny would have been unable to spring off his back foot severely limiting his ability to generate enough power to walk never mind run.

This is because the calf muscle connects to a bone in the foot called the calcaneum at the back of the ankle. Usually when your Achilles pulls on your heel, it will raise and the foot will go up on to the tip toe. The same motion that propels your feet when you walk and run.

It’s fair to say that first off, at some point it’s going to hurt. That pain may be lessened for someone with adrenaline pumping through their veins like a footballer in the middle of a game, but you can bet they’ll feel the full effect sooner or later.

With that said, a sudden, sharp pain could be accompanied by a snapping or popping sound(I squirmed too). It may feel as though you’ve been hit or kicked on the back of your leg even though no one’s near you.

The pain may then settle into a dull ache or go completely. You might also experience some swelling in the calf area and be unable to put your full weight on your ankle, stand on your tip toes or climb stairs.

If you only partially rupture it, some pain and stiffness may come quite quickly but you may not hear a snapping sound and you may be able to walk on your ankle, so it’s important to get checked out

Recovery times from ruptured Achilles tend to vary depending on the severity of the tear, for example whether it’s a partial or full rupture.

Once any cast has been removed a period of passive exercises aimed at regaining mobility in the joint is the suggested therapy. After several weeks more strenuous resistance exercises can be used.

Return to routine activities usually occurs at four to six months, but recovery is always dependent on the patient’s motivation desired future activity levels and the quality of the program.

There have been other famous examples of ruptured Achilles tendons:

Back before we saw the ultimate conclusion in David Haye and Tony Bellew’s rematch, the first bout in March of 2017 was settled by Haye rupturing his Achilles tendon in the sixth round, much to an eagle-eyed Bellew’s delight, who took advantage.

In a feat of almost superhuman dedication, Haye then soldiered on one-legged, swinging for the fences from his uninjured front foot, before being knocked out rounds later. 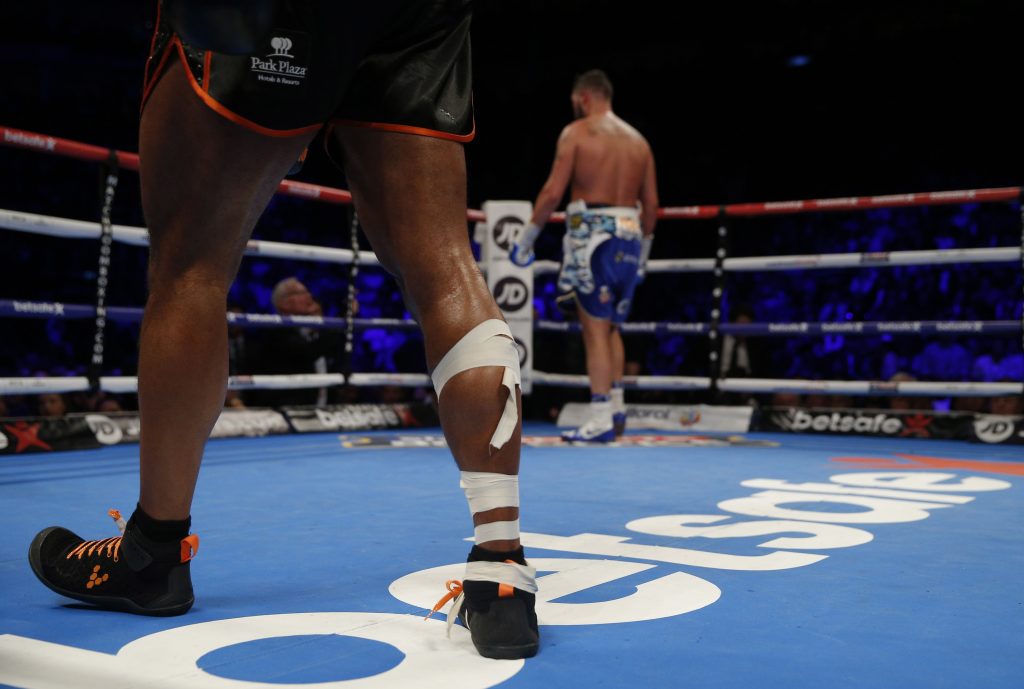 Some may argue the problem still bubbled beneath the surface in the rematch, but it certainly didn’t rupture in the graphic way we saw in the first.

Looking back at the injury, Haye said:

“It felt like my leg went into a bear trap. The floor opened up and it just bit me. I looked at my foot and I couldn’t control it.

“When they opened up my achilles it was like spaghetti, it was a mess.

“I never thought I’ve got to give up or stop. In hindsight, when you get an injury like that, continuing to walk on it is only making it worse.”

The former Los Angeles Lakers shooting guard and NBA legend famously fell foul an Achilles rupture in April of 2013 while playing against the Golden State Warriors. The 18-time NBA all-star would not  return for 240 days, or nearly 8 months.

Speaking of the injury, Bryant remembered:

“When I first did it, right there, I was trying to feel if the tendon is there or if it’s gone,”

“I realized it wasn’t there. I was literally trying to pull the tendon up, so hopefully I could walk and kind of hobble through the last two and a half minutes and try to play.

Back in March 2010 David Beckham suffered a ruptured achilles while playing for AC Milan on loan from LA Galaxy which kept him out for 8 months.

Speaking of his injury, Beckham recalls:

“It was like being hit by a hockey puck,

“I thought someone was behind me and had kicked me. I looked round, obviously there was no one there.

“And then I saw my foot. It was just hanging. And then I felt down there and there was a hole and I knew straight away what I’d done.”