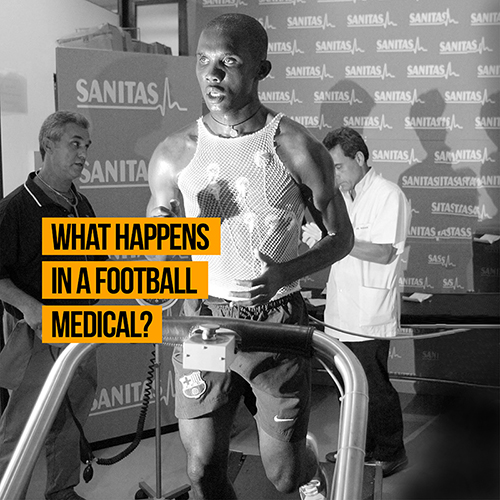 The transfer window slammed shut on Wednesday and it was an uncharacteristically busy one for Premier League clubs.

It’s been a month-long slog of speculation, twitter flight tracking, and lonely photographers standing in the drizzle outside of various training grounds, all for a poor-quality shot of half of someone’s face in the back of a car.

BREAKING: Man gets in car to head towards medical!

UPDATE: Man gets out of car at training ground!

SUPER-UPDATE: Man begins medical…we think…were not 100%, he went inside the building and we can’t see him anymore. But we’re going to attempt to monetise this non-update anyway!

And so on. But despite the constant tracking of a prospective new players movements, we know very little about the medical process beyond the likes of Real Madrid releasing the odd image of a footballer giving a thumbs up while adorned in a multitude of wires.

Or of course, the footage of a footballer running on a treadmill with a large tube in his mouth which you could mistake for a scene from a Sci-Fi movie in which aliens are testing the human race to see who is worthy of ascension to the stars.

My firmly copyrighted ideas aside, let’s dig a little deeper in to the process, shall we?

In times past, the pre-signing medical was a mere formality and often over in less than a couple of hours, but today, with billions of pounds swilling around the footballing trough, the process is understandably somewhat more rigorous.

The first part of a medical will be taken by the club doctor, who will establish a medical history while examining the player.

This may require the presence of an interpreter or the player’s agent should the player not speak English, so that there’s no confusion over his history.

This is important, as while in 2018 any high-profile players injury history is usually common knowledge – we like to keep a record ourselves, if you haven’t heard – there are unknowns like family history that may lead to hereditary conditions.

Usually the buying club will receive a player’s history from the selling team, which will fill in certain unknowns like how often the player has missed training and why.

This subjective examination is followed by a thorough physical one which includes a check of all muscles and joints. The medical professional will assess things like range of motion and muscle strength via isokinetic devices.

After the completion of both the subjective and objective tests, a doctor may see fit to dig a little deeper in to some previous injuries. For example, if a player had has surgery on something like an ACL, they may perform an MRI scan to make sure everything is good inside the knee.

Should any problems arise, the player may end up being referred to a consultant who will assess the player and advise the buying club of his prognosis, after which, they will decide whether to sign the player.

Now, here’s an example run-through of what tests a player might undertake during a medical:

A cardiac screening involving an ECG, echo monitor and a check of the players history in this area. This could also include urine tests for conditions such as diabetes.

This test involves searching for weak spots in the players musculoskeletal system, focussing on usual weak spots such as the lower back and pelvic regions, which are often where hamstring problems, both current and future can stem from and be spotted.

This sort of test monitors how the bodies muscles work together, to spot any weaknesses or imbalances, which could be a result of neglect because of an injury lay-off and could indicate a predisposition to injury in the future.

If a player has a long history if injury, tests such as an ultrasound could be used to spot any potential problems deep in the tissues.

Most footballers’ body fat is around the 10% mark, so often a test to measure this will be carried out using bioelectrical technology.

To check out who’s injured at the moment, head on over to our injury table, which features info on injury type, expected return dates and more!