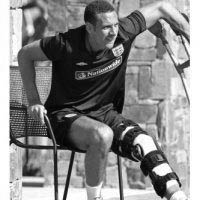 Following on from a pretty hectic couple of days I thought I֤ provide a quick overview of this weeksՠkey injury talking points taken from the build-up to tomorrows Premier League kick-off.

Midweek Internationals started the ball rolling and itֳ been full-on ever since, first up we were greeted with the *breaking* Benteke injury, pardon the pun as the Twitter rumour mill went into overdrive. News spread that the Belgium beast was the victim of a serious leg injury during the bore-draw against France Рthe hoax even had Joey Barton fooled who sent get well wishes #FAIL The Aston Villa striker is Ӧit and raring to goӼ/em> in the words of manager Paul Lambert.

Arsenal always seem to suffer more than most and this preseason is no exception! Firstly Mikel Arteta was ruled out for up to 6 weeks due a thigh injury picked-up in training,ˡnd this wasˣlosely followed byˡ host of his fellow team-mates causing blind-panic in the North Bank. On Monday Walcott took a heavy knock to the ankle making him a doubt for England duty, before being passed fit and leaving the field on 75 minutes with a swollen knee. The striker / winger wasnִ the only casualty as Aaron Ramsay withdrew from the Wales squad (ankle) and Bacary Sagna was seen limping post-match. However the good news is all three are expected to recover in time to face Villa at The Emirates.

Across London at Chelsea the talk˩s all about˓panish midfield maestro Juan Mata who is carrying a slight knee injury; although not serious the player will face a late fitness test before the Hull City game. If deemed eligible for selection I honestly canִ see Mourinho risking a start for The Blues Number 10 and feel a place on the bench is more realistic.

Staying in London, Spurs fans will be hoping Jan Vertonghen will pass a late fitness test. The Belgium defender has been out since July with an ankle problem but a solid week of training makes a return a real possibility. A few of you also asked about the chances of Younes Kaboul and Sandro being involved, I canִ see a start anytime soon given the significant amount of time each player has missed but a place in the squad would be a reasonable assumption.

Southampton supporters have been keen to establish whether the services of two key defenders will be called upon for this weekendsՠopener, well in short we still donִ know but Pochettino is ӨopefulӮ If pushed to give a definitive answer I֤ say Luke Shaw has a better chance, the England U21 responded well to treatment this week and although Nathaniel Clyne wonִ be far away he has missed the last three games which will leave a question mark regarding his match-fitness.

Other players to note around the division, Darron Gibson (knee) Ӵouch and goӠbut doubtful in my opinion and City fans will be pleased to see Sergio Aguero back on the training ground, however unlikely to start. Yaya Toure has recovered from a minor back problem with Nastasic still a week or two away. Opponents Newcastle United only have the one short-term concern at present – Jonas Gutierrez whom I think will make the trip. Loic Remy will return to training next week, but donִ expect to see the French forward for a while yet. When it rains, it really pours and Ian Holloway is rightly worried. Before a ball has been kicked, an already threadbare squad have suffered yet more injuries heartache this week as Yannick Bolasie was ruled out because of a hamstring injury, joining Paddy McCarthy, Glenn Murray and new-signing Jerome Thomas on the treatment table.

Liverpool expect to start the campaign with a fully fit squad, Luis Suarez a notable absentee through suspension with Daniel Agger, Martin Skrtel and Daniel Sturridge are all available for the opener with Stoke. Norwich may have to take on Everton without new-signing Gary Hooper, the striker was lucky to escape a serious leg /shin injury last week but heavy bruising could rule him out. Captain Seb Bassong will not be available as Chris Hughton decided not to risk the player who has only completed 60 minutes of game time this preseason.

Keep following our Twitter feed throughout the weekend for all the latest injury updates and donִ forget our about our Injury Table which includes projected player return dates.

Followers still have time to register for our free All-Star Fantasy Football League, play against celebrities from the world of sport / media / entertainment. Our game is free to enter with giveaways, monthly prizes and special discounts for registered managers + much much more ʉ.