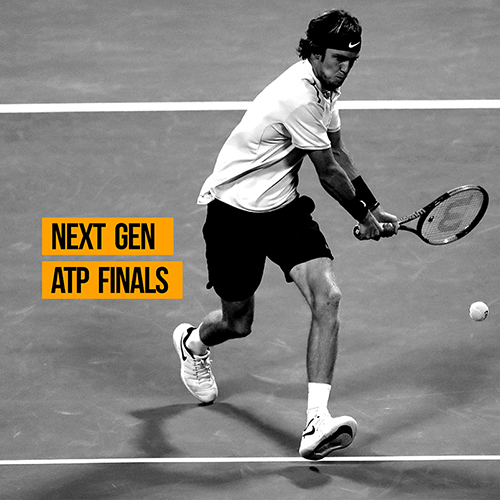 It’s the newfangled Next Gen ATP Finals this week, and if you’re a raging sexist who uses words like “phwoar”, then you’ll have certainly enjoyed the finals draw.

But fear not tennis fans, as once the dust settles on that almighty PR gaff, the players take centre stage.

And it’s the next generation of tennis stars you’ll see on show, which explains the name.

Taking place in Milan, it got under way on Tuesday the 7th and will finish on Saturday the 11th.

It is the equivalent of the ATP Tour World Finals in London where the biggest stars in tennis such as Andy Murray and Roger Federer come together, but here lies the chance for someone to make their own name.

The very best of the under 21 players from the ATP World Tour will compete in two round robin groups.

The top seven players in the Emirate ATP Race to Milan qualify for the tournament, with the eighth spot being reserved for an Italian wildcard.

Alexander Zverev, the world no.4 from Germany would have been the highest ranked player at the event but choise to focus on the senior finals in London, meaning the top seed will be Andrey Rublev, who sits no.35 in the world.

Here’s all the players involved:

The competition has gotten under way under the direction of a raft of new rules and regulations.

The games will be played in first to four games sets (with a tie break at 3-3) from a best of five sets.

They’ve also introduced a shot clock between points to ensure the 25-second rule is adhered too, a no-let rules and the ability for coaches to have periods to communicate with their players during the match.

Interestingly, the umpire will be the only human official on the court, as instead a system with an automated voice will call the balls out, or call fault.

Importantly, they’ve also limited injury time out’s to one per player per match.

But what about injury? How at risk are these young, future stars?

It’s worth mentioning a Loyola University Health System study of 519 junior tennis players found that young players who only participated in one sport, tennis, had increased chance of injury.

The reason for this we can speculate on, in that each sport requires, while at times similar, vastly different sets of movements.

This also means that certain movements, that help build certain muscles or correct imbalances, may not be performed, meaning a weakness or imbalance can occur, leading to not just injury in the area, but other, connected areas. Proprioception, the body must move as one.

Now here’s some of those injuries these future stars will have to navigate around.

Andy Murray wears braces on both ankles every time he plays due to longstanding issues.

How it happens: Many players can suffer sprained ankles if the joint twists or turns while they are running to return a shot or if they fall on a slippery surface. Itֳ’s even been known for players to accidentally tread on the ball as they chase it and roll their ankle that way.

The effects: Can range from damage to a few ankle ligament fibres to the complete rupture of the ligament. Pain and swelling will follow, the severity of which depends on how badly the ligament has been damaged.

How can we help? Try the Air Shield Walker for supreme protection in the aftermath of a serious injury. For rehab, the Aircast A60 Ankle Brace,˷worn by Murray himself, offers support and stability.

Novak Djokovic was forced to withdraw from the Western & Southern Open Final in 2011 due to a shoulder injury, handing the title to Andy Murray. Though it was his rotator cuff area which was troubling him, he thankfully did not suffer a tear.

How it happens: Naturally the mobility of the shoulder is heavily relied upon in tennis, as players require their strength in the area to return a shot or hit a fierce serve. It’s not uncommon for this repeated stress to impact a player’s ability to do something as simple as hitting the ball.

The effects: The rotator cuff muscles are situated near the shoulder joint and can become overloaded with repeated strain. This causes inflammation and, in more severe cases, could create a tear in the muscle.

How can we help? A swollen and painful shoulder can be aided by the ice therapy powers of the Aircast Shoulder Cryo/Cuff. Afterwards, a Shoulder Support Strap will provide compression and heat therapy to aid the healing process.

Defending champion Steffi Graf had to withdraw from the Australian Open in 1995 before the tournament had started, due to straining a calf muscle in her right leg.

How it happens: The calf muscles are active when a player pushes off from the floor as they try to react as quickly as possible to their opponent’ shot. As this muscle’s function is to pull up on the heel bone during this process, it can be easy for them to strain or tear if they are stretched beyond their limits.

The effects: As with the sprained ankle, the calf muscle can either suffer a slight tear to the fibres or a complete rupture, with the accompanying degrees of pain and swelling. Often the player will be unable to walk and forced to rest the area.

How can we help? The Ultimate Performance Elastic Calf Support can help prevent the problem before it occurs if you have weak or injury-prone calf muscles from previous issues. If you’re undergoing rehab for a calf strain, try out some strengthening exercises with these Resistance Bands.

STRESS FRACTURE OF THE BACK

Talented young player Thanasi Kokkinakis suffered a stress fracture to his back during the Australian Open boys final in 2013, which kept him sidelined for much of the year.

How it happens: This is a common problem in young players as they experience a growth spurt. Overloading the area can occur in tennis, particularly when players bend backwards to reach a shot and especially if they are only standing on one leg at the time.

The effects: It is medically known as spondylolysis and refers to microscopic cracks in the vertebra. If the bone is healthy, it will heal through a process called remodelling Рbut only if it is given adequate opportunity to do so. In this case, six weeks of complete rest is required.

How can we help? The pain associated with the early stages of a stress fracture can be soothed by heat packs, which also help reduce muscle spasms in the area. While the player rests, an Elite Back Brace has several features which can provide the wearer with comfort and extra support.

Serena Williams pulled out of the Italian Open in 2015 when she sustained an injury to her right elbow. But ironically, tennis elbow actually isnִ all that common in professional players.

How it happens: The prolonged gripping activity associated with tennis and other racket sports is the main cause of tennis elbow. The reason it doesnִ affect professional players as often as the name suggests is due to the fact that their superior technique and arm strength helps reduce the chances of the muscles in that area feeling the effects of the constant use. Players who are particularly fatigued and playing several high-profile tournaments with little rest can be affected, however.

The effects: This condition mainly affects the tendons in the forearm, and inflammation is typically seen where they attach to the upper arm bone. Pain is felt when the outside of the elbow is touched, the hand is moved at the wrist when the elbow is straight, or gripping activities are attempted.

How can we help? Applying ice packs to the area can help reduce the swelling, while sufferers wearing a Tennis Elbow Support Strap find that the symptoms of tennis elbow are relieved.