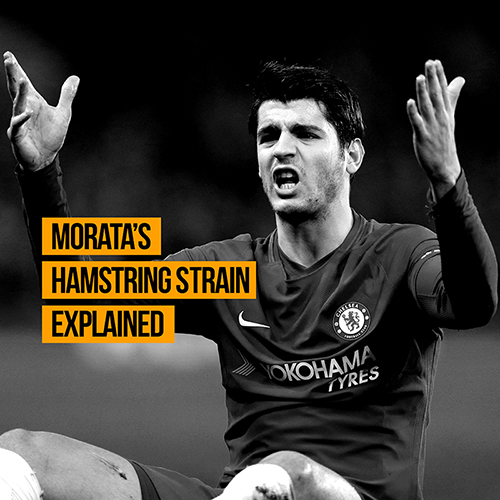 The hamstring injury plagues not just footballers but athletes of all disciplines across the globe.

But as far as the beautiful game is concerned, PhysioRoom.com’s own analysis of injuries has shown that hamstring strains can account for up to 40% of injuries in one season alone and were by far the most common injury in the 2016/17 season.

The Chelsea striker has been diagnosed with a “grade two myofascial injury”, which is a fancy way of saying muscle injury, according to reports emanating from Spain.

It would be a bitter, momentum-halting blow for Morata, who has hit red hot form after nailing down a place in Antonio Conte’s side.

“But how long will the erstwhile Real Madrid man remain on the side-lines?” we hear you ask.

Well, let us explain why don’cha…

What is a Hamstring Strain?

When you sprint during a game, the hamstring muscles can be forcibly stretched beyond their limits and the muscle can be torn. A tear in the muscle is referred to as a strain, depending on its severity, being classified as a first, second or third grade strain.

With a grade one strain you’ll still be able to walk pretty much normally, but you may have some tightness in the back of the thigh. You’ll be aware of this discomfort and will almost certainly be unable to run at full speed.

There could be mild swelling and spasms, but normal movements are unlikely to produce much pain.

A grade two hamstring strain will limit your walking pattern and you’ll more likely than not be limping. You may notice the hamstring muscle swelling and the muscle will be tender to the touch and sudden twinges of the of pain will present themselves during activity.

Trying to bend your knee against some form of resistance will be painful.

A severe injury involving a tear to half or all of the hamstring muscle. A grade three hamstring injury may require you to walk with crutches and you will experience severe pain and weakness in the muscle. There will be noticeable swelling and within 24 hours you should start to see bruising.

As we know, Morata was diagnosed with a grade two strain, so that means he’ll likely be out for 4-8 weeks if the reports are accurate.

But now that we know what they are, what are some of the causes you need to look out for?

The main cause of a hamstring strain is usually due to poor intermuscular timing and coordination and a lack of eccentric strength or ‘stiffness’ in the hamstring muscles. This lack of ‘stiffness’ means the ability of the muscle to shock and rebound is lessened.

This, often combined with a number of variables can cause a hamstring strain, some of those variables are:

Poor Warm-Up – Not performing a proper warm-up can massively increase your chances of sustain a hamstring injury. A warm-up must be active and dynamic to prepare the muscles.

Playing Surface – A wet surface can put extra strain on the hamstring due to slipping.

Poor Running Mechanics – This is usually due to over striding or poor pelvic control which can cause nerve dysfunction which can weaken the muscle and make you more prone to injury.

Lower Back Problems – Abnormalities of the lumbar spine can also cause the nerve dysfunction which can weaken the muscle and make you more prone to injury.

Heavy Training Loads – Hamstrings are fast twitch fibres that fatigue quickly. High intensity/speed work should be done earlier in workouts and as a close to your warm-up as possible to help avoid fatigue.

If you’d like any further information about hamstring injuries, check out our Hamstring Injury Page.