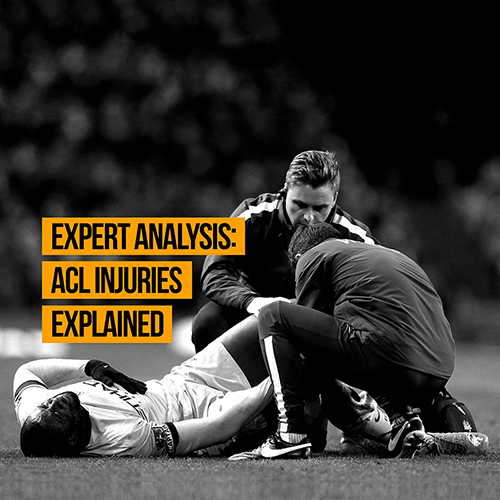 When Manchester City’s Benjamin Mendy fell to the floor against Crystal Palace last month after a challenge from Andros Townsend, no one quite knew what was wrong.

Initial scans on his heavily swollen knee proved inconclusive, as football’s legion of journalists and fantasy football enthusiasts alike began to speculate the extent of his injury.

So when a specific journalist suggested the 23-year-old Frenchman could be facing nine months out with a ruptured ACL, people were understandably shocked.

A twitter storm ensued, as they tend to do, as Mendy himself questioned the credentials of the journalist and commented how even he wasn’t sure the severity of his injury just yet.

As it happens, on this occasion the journalist got the luck, and Mendy’s knee didn’t.

His manager Pep Guardiola confirmed last week that the left-back, who signed for £52million from Monaco in August, will be out “until the Champions League semi-finals.”

Or April, for the none football-schedule-aficionado’s out there. A lengthy spell on the side-lines for a player who had already shown his quality in so few appearances.

But why the confusion over diagnosis?

We spoke to North London Physiotherapy’s David Wales, who has fourteen years’ experience working with Premier League teams as well as being part of the FA and UEFA Injury Study Group, to get some ins and outs of the dreaded ACL.

So how does it start, what are the first steps immediately after injury?

“There is a window of opportunity immediately after a knee injury occurs where the physiotherapist can assess the knee using specific orthopaedic tests to determine if there has been rupture or partial tear of the knee ligaments or a tear of the meniscus (commonly known as the cartilage),” said Wales.

“In the immediate aftermath of a ligament rupture there will be huge ‘joint play’ where there is no feeling of restraint from the ruptured ligament.

“This makes it easier to diagnose the injury on the field, because there is a release of blood into the damaged joint and the joint will become swollen within an hour.”

Which could somewhat explain the lack of early confirmation in Mendy’s case, as the knee swelled so quickly. Although this can, according to Wales both be a helpful sign towards diagnosis and a limiting factor at the same time.

“This rapid swelling is known as a ‘haemarthrosis’ and this is itself indicative of a cruciate ligament rupture,” the former Arsenal physio said.

“Once the knee is swollen it is more difficult to elicit a definitive feeling of instability within the injured joint.”

Without knowing the exact specifics of Mendy’s case, it’s always hard to determine where the confusion lay.

But according to Wales, even scans themselves aren’t always fool-proof tools of determining the extent of damage.

“ACL injuries have three levels of diagnosis,” he said.

“Firstly, clinical orthopaedic tests on the field or in the medical room; secondly, imaging findings where an MRI scan demonstrates a rupture of the ACL, this is usually done a day or two after the initial injury; and thirdly in some cases the MRI scan is equivocal and the ACL looks like it is intact, but in fact it isn’t.

“In these cases the diagnosis is based on clinical suspicion and confirmed when a surgeon carries out an arthroscopy(keyhole surgery) on the knee.”

Once diagnosis is achieved and surgery, if needed, is out of the way, how long the likes of Mendy and others face out, isn’t always definitive.

Wales told us: “The timescales for rehabilitation are now likely to be around eight months following an Anterior Cruciate Ligament reconstruction.

“I personally think that 6-9 months post-surgery is a sensible target for returning to competition, but timescales for Premier league players are increasing with many taking over twelve months to return to competition.

“I suspect this has more to do with the changed attitudes of players and their agents who are understandably more interested in a longer playing career than a rapid return to action.”

Attitudes aren’t the only thing to have changed over the years, and that aside, technological advances mean that recovery times should be, in theory, much shorter.

Especially when compared with decades gone by.

“When I was working in football the 1990’s the timescale for ACL rehabilitation was coming down continuously,” said Wales.

“Some Australian athletes were returning to competition at four months post reconstructive surgery.

“By the late 2000’s the rationale during rehabilitation changed as it was thought that rushing the rehab may make the athlete more likely to get osteoarthritis of the knee.”

Once the injured party has toiled and shed blood, sweat and tears through their rehab period, there’s always the worry that such an injury could reoccur. According to Wales, there’s a special distinction to be made.

“It depends on how the first one was caused.”

He continued: “If it was due to contact then there is no change in the risk. If it was a non-contact injury then theoretically the risk of recurrence will be higher.

“This is because players who sustain non-contact ACL injuries often have dysfunctional lower limb biomechanics and a faulty landing pattern.

“For non-contact ACL injuries there are recognised risk factors, the most relevant of which are how the players move, specifically their hip, knee and ankle alignment as well as fatigue levels.”

So what should be the go-to area to look at to avoid suffering the same fate as Mendy and the many others who’ve fell victim to a knee ligament injury?

“The best way to reduce the risk of ACL injury is to address movement faults with a physiotherapist as well as closely monitoring fatigue levels during training and competition.”

And now we know!