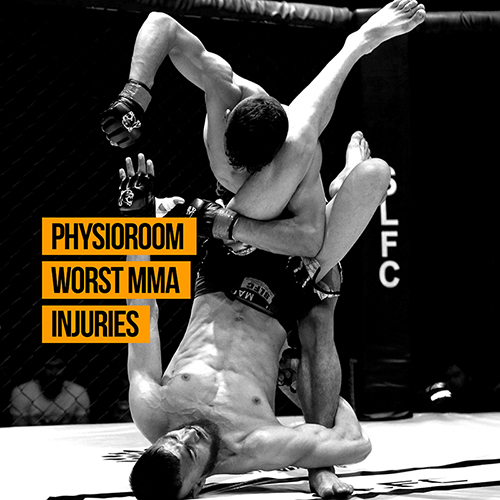 The MMA world is no stranger to devastating injuries. Whether it’s in the octagon on fight night or during training camp, injuries are only ever one takedown or strike away from happening.

The somewhat base and brutal nature of MMA means impact injuries are inevitable, be it a leg snapped entirely in half while delivering a kick like Anderson Silva suffered in his fight against Chris Weidman at UFC 168. Or someone’s pride getting the better of them and refusing to tap to a submission hold, leading to some inevitable, and gruesome snappage.

While such injuries are quite common place, here at PhysioRoom we want to go beyond the simple impact injuries to the knitty gritty, and check out some injuries that really plague some fighters, not just on fight night, but 24/7.

So join us while we run through some injuries, as well as some accompanying horror stories…

First of all, it’s important to point out that the term “staph infection” is used somewhat loosely. ‘Staph’ refers to staphylococcus, which is a specific bacteria that is predominantly involved in skin infections. If the infection caused by the bacteria remains a simple skin infection it’s classed as cellulitis, but when it gets down the muscle, bone and ligaments etc. it can be considered fasciitis.

For grapplers and fighters, people involved in constant skin to skin contact, it is usually seen on the skin. Staph bacteria is part of our normal skin flora, meaning it’s normally all over our bodies regardless.

Often fighters will be in close contact with someone who has an infection already, thus the levels of bacteria on the skin are higher. Combine that with a small cut in the skin, some hard-work and some sweat, and you’ve got the perfect storm for a staph infection. Not only that, but the bacteria can stay alive on equipment too such as pads/mats, and spread from there.

In its simplest form it’s just a skin rash. And if treated immediately with an antibiotics it can usually be taken care of within a week. If it goes further, then come the problems. Once a pocket is formed, a doctor will have to re-enact something from medieval times and lance it open, again with the recovery time of about a week.

Some strains of staphylococcus bacteria are resistant or immune to common antibiotics however. This can lead to a ‘super-bug’ or MRSA (methicillin-resistant staphylococcus aureus) which can get out of hand rapidly and medicinal treatment is limited. Oral antibiotics become ineffective and IV antibiotics are required, with the idea being IV’s offer a higher concentration of the drug in the area of the infection to fight it.

The infection forms a pocket, more commonly known as an abscess, the pH or acidity of that abscess is different from that of surrounding tissues, which makes it difficult to treat as the normal antibiotics don’t work in such an acidic environment.

Before we go on, this section will feature some pictures of staph infections, so if you’re of a queasy disposition, you might want to look away. Otherwise, get ready to question whether you ever want to train in MMA.

The late Kevin Randleman(who died of an unrelated condition), was a former UFC Heavyweight champion, and he suffered one of the worst cases of staph ever seen in mixed martial arts, or anywhere for that matter. Seriously, we bet this stung a little.

Kevin said of his infecion: “I was in critical condition for almost three weeks and I am two weeks out of the hospital now … pain is just part of the healing, and it hurts a lot…. I had two organs shut down again. I think what I need to do is stop enduring the pain and go see the doctors earlier.”

Yeah….you probably should have Kevin.

All around nice guy and universally adored former fighter Forrrest Griffin came down with a nasty case of staph back in 2009 that forced him to drop out of a fight against Lyoto Machida at UFC 70.

There’s also a video floating around of his infection being drained, but we’ll leave that one for the purists.

Muhammed Lawal, better known as ‘King Mo’, suffered such a horrific staph infection that he neared giving up, or as he told Sports Illustrated in 2012:

“I had this moment where I was like, man, I can see my hip bone. I was ripped still. I had an eight-pack. But there’s my hip bone. I looked at my leg, and it looked like those zombies from The Walking Dead. That’s how it looks right now. I’m getting to where I can kind of strengthen it, doing leg lifts and stuff. But I looked in the mirror and was like, man, look at me. I didn’t know it was that bad until then.

“I got to the point where I was like, [expletive] it. I just felt like, hey, I’m going to quit taking this medicine, and if I die then I die. I’m tired of this stuff.

“I feel like I looked death in the face, and I survived. I’m talking death of my career, and death in life. I faced that. It was tough. It really did make me appreciate my life, just my everyday life. I used to think, not that I hated working out, but that I hated feeling tired. Now, I miss feeling tired. I miss getting punched, kicked, kneed, elbowed. I miss all that.”

Plantar Fasciitis is a problem of varying degrees that affects the flat band of tissue (ligament) that connects your heel bone to your toes. This flat band of tissue, or the plantar fascia, also supports the arch of your foot. The plantar fascia can become weak, swollen or irritated/inflamed if strained, causing your heel or the bottom of your foot to feel pain when you stand or walk.

There are several general causes of plantar fasciitis. Repeated strain can cause tiny tears in the ligament, these can lead to pain and swelling, this is likely to happen in situations where someone may be overweight, wear shoes that don’t fit well or are worn, stand for long periods of time on hard surfaces, have high arches or flat feet or someone who’s feet roll inwards too much when walking(excessive pronation).

For a fighter, the connections are obvious. Training every day intensely for months, often bare footed is bound to place strain on the bottom of the feet.

There’s no better example of the lengths Plantar Fasciitis can get to than of former UFC Bantamweight champions and all-time-great Dominick Cruz.

The 31-year-old had been suffering with the condition to a lesser degree for some time, but it was after a long injury lay off, meaning he couldn’t train and condition his feet that the problem increased ten fold.

Because of the lay off, and the fact that Cruz jumped straight back in to an intense camp from no activity that he had to endure what he says is an “out of control” ailment.

“For the Cody fight, it [plantar fascia tendinitis] multiplied by two in both feet, it’s been out of control,” he explained.

“No excuses, I want to go ahead and make this clear.

“[Before fighting Garbrandt] I shot botox into the bottom of my feet. It was an off-the-wall method because there’s no cure for plantar fascia tendinitis.

“I heard from other doctors it’s an underground method, I was just willing to do anything. I was in so much pain.

“I would wake up in the morning and have to go on my hands and knees to the bathtub so I wouldn’t put weight on my feet, I’m not kidding, during fight camp.

“I wouldn’t put weight on my feet because they were too cold so it’s like needles stabbing you.

“That was for all three of the fights this year, I’ve had to deal with that.”

Cruz was able to, somewhat unbelievably win the two fights previous to the Garbrandt loss against Uriah Faber and TJ Dillashaw despite suffering from the condition.

PhysioRoom.com stocks a number of insoles, including the new Enertor insoles which are endorsed by none other than Usain Bolt. They harness patented d3o technology to help alleviate pain and symptoms of Plantar Fasciitis.