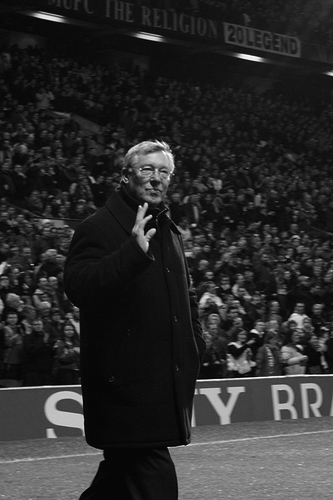 Having been in charge for longer than some of his former players had been alive, there was no doubt in anybody’s mind that Sir Alex Ferguson was going to be a tough act to follow at Old Trafford. And so, David Moyes, left with a pitiful squad who seemed to be in a state of mourning all season, took over the reigns at Manchester United in 2013 to much speculation and some controversy.

Dubbed The Chosen One by theʼa title=”Old Trafford” href=”http://www.manutd.com/en/Visit-Old-Trafford.aspx” target=”_blank”>Old Trafford faithful*, Moyes was plagued by a lack of decent summer signings, a lack of support from his players and the pressure of taking on one of the most highly talked about jobs in the footballing community. The question remains, was he ready for such a big job?

In terms of trophies, his honors may have been lacking but surely anyone who could handle Duncan Ferguson could handle Manchester United?

Regardless of the who’s, what’s and why’s of it all the crux of the matter is thatʼa title=”David Moyes” href=”http://en.wikipedia.org/wiki/David_Moyes” target=”_blank”>Moyes is now out,ʼa title=”Manchester United” href=”http://www.manutd.com/” target=”_blank”>United are in complete tatters and now the new man has walked into one of the toughest jobs in football.

Or has he? The fact of the matter is thatʼa title=”David Moyes” href=”http://en.wikipedia.org/wiki/David_Moyes” target=”_blank”>Moyes fell so far, so quickly that any sign of improvement is going to be a massive deal for United fans who surely must accept by now that they will not be winning leagues anytime soon. With pensioners such as Rio Ferdinand, Nemanja Vidic, Patrice Evra and Ryan Giggs all jumping off the red ship Devil newly appointed Louis Van Gaal has actually walked into not a minefield but a fantastically clean slate. Lucky man.

With a host of trophies under the Dutchman’s belt including league titles at Barcelona, Bayern Munich and AZ Alkmaar alongside winning the Champions League and the league with Ajax, Van Gaal has the credentials and the ego to satisfy the United fans in the stands and terrify the players on the field.

United are out for blood but only time will tell if he has the bite.

Check out our awesome video for some things you may not know about Louis Van Gaal.