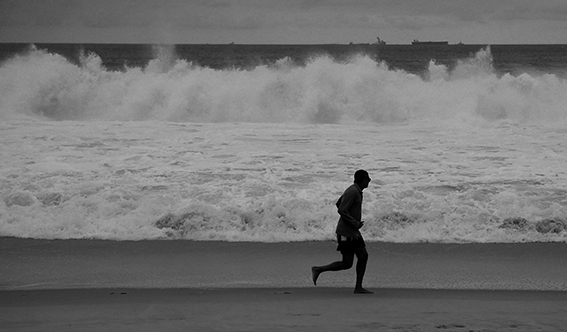 Minimalist running has been the subject of much controversy and debate since the release of Born to Run in 2009 and now, Blightyֳ running community flaunt a new type of shoe; the minimalist running shoe. Our resident runner Toby Cryne examines the phenomenon of minimalist running and the pros and cons of the new (old) style in comparison to the tried and tested heel down techniques of old.

Ӎost runners are geeks. There, I said it. And of course, I include myself well within the parameters of this insult. Runners, in contrast to what they may tell you, are not normal people. After all, how many other people do you see littering your Facebook feed with personal bests, weekly mileage or pictures of their feet? No, runners are not exactly the most normal characters in your friend list.

Neon running tops, skin tight compression wear and crotch flaunting leggings are both the subject of attention and ridicule as the exhibitionists within us flaunt our skinny legs and thigh gaps. And as if the clothing couldnִ get any more ridiculous, the barefoot running shoe has now become commonplace, the Vibram Five Fingers being the most hilarious variation of the lot.

The 2009 semi-autobiographical running bible Born to Run by Christopher McDougall has been a catalyst for massive change within the running community. Opening the door to the peripheral culture of ultra-distance running, the book spawned a new flock of minimalist running hipsters and introduced the common man to the Rarȭuri˰eople of the Mexican Copper Canyons.

But what exactly is minimalist running and how can the techniques which seem to have become the topic of just as much medical criticism as admiration benefit you?

What is minimalist running?

Though the phenomenon may sound like mere satire in a sub-culture dominated by tech geeks and data junkies, minimalist running turns the common ideal of how we run completely on its axis. In the most simple of terms, minimalist running is the replacement of the traditional supported running shoe with low profile, zero support shoes with thin soles, low arches and little cushioning. Basically everything your mother told you to avoid.[1]

The idea behind this madness is that by removing the cushioning beneath the heel and arch support, the runner will revert to running on the mid-foot of the sole or even the forefoot. A direct contrast to the the heel-toe technique adopted by the stability shoe masses. Controversy lies in the reasoning why. Some argue that humans have run barefoot on the mid-foot all throughout our natural evolution, and when you think about it, the accepted form of cushioning by heel support is a human invention, not an evolutionary one.[2] We were designed not to˵se heels and as for the traditional running shoe, that was invented in the 70’s.

Needless to say, Born to Run, which pointed out evolutionary evidence, anatomical evidence and (just a little) bias sold many injury prone athletes to try out this new style of running technique. Vibram Five Fingers flew off the shelves, and though initially designed for use in sailing, other companies saw the mass potential of the growing mini-economy and minimalist running was born.

There is substantial evolutionary evidence that can argue a great many things in the minimalist running debate. Our Achilles tendon for example differs greatly from շalkersՠsuch as quadrupeds (Chimpanzeeֳ). Whereas a Chimp will use its four legs to run and walk on (mainly) its hind legs, the human being walks and runs on both. Our Achilles tendon therefore˩s designed in such a way that to run on our heel without any shoes is uncomfortable, hence why children donִ do it until they have learnt to run in traditional style running shoes.[3]

The argument seems not to be whether we have evolved to use heels or not, but rather whether the use of heels is the cause of, or solution to many common running ailments. Naturally, as with all things concerning marketing and money the science is ‘inconclusive’ thus far and though companies such as Nike and New Balance have joined Vibram in creating minimalist running shoes, the sheer effort it takes to become a forefoot runner most likely sways many off completely.

Alas, I am not equipped enough to argue with the boffins.

What are the benefits?

It is largely agreed upon in the scientific community that normal running shoes or rather shoes in general, have cheated evolution somewhat. It doesnִ take super-science to establish that we, as a race, were not designed to run on our heels.

Remove your shoes next time youֲe hitting the pavement and you֬l see, it hurts like hell. Both the gastrocnemius (calf muscle) and the heel bone itself will be extremely uncomfortable and before long you could do some serious damage. Running on the well-padded mid-foot however will seem more natural and should alleviate most of, if not all of the problems listed above.

A study in the Journal of Sport and Health Science quantified this theory when it found that an overwhelmingly large majority of barefoot runners, around 80% ran on either their forefoot or mid-foot.[4]

There is also evidence to suggest that mid-foot running in minimalist running shoes reduces impact on the skeletal system when compared to running on the heel. A study by Daniel E. Lieberman, AKA The Barefoot Professor, professor of human evolutionary biology at Harvard University found that there was next to no collision force subjected unto the feet when runners landed on their forefoot, a direct contrast to heel strikers who naturally wore supported running shoes.

This may not seem massively important due to the cushioned nature of these types of shoes, but when you realise that humans can put out three to eight times their body weight in lbs of pressure when running it could be argued that minimalist running techniques, with their natural reduction of down force could help to alleviate common ailments in runners. By reducing the direct force on the skeletal system, could minimalist running be the answer to that aching back or knee pain?

Check out the Barefoot Professor himself in the video below:

How to go barefoot

As a human being in the 21st century, you have been conditioned to wear heels. It is a sad fact that our foot health is probably the worst it could be. Elaborate high heels, ill-fitting trainers and those frankly ridiculous man boots flaunted around Hoxton on a Friday night are not designed within the parameters of our evolution.

The reason why many try and consequently fail with minimalist running shoes or even barefoot running is due to the fact that they try and revert to their natural gait instantly.˄ue to technologies, you have no doubt worn heels for the majority of your life and so your body has become conditioned to them. Removing your heeled shoes and running 20km is going to hurt. A lot. One of the reasons why people avoid barefoot running is due to the time it takes to convert. And so, they plod along in pain for no reason.

In a former role, I personally worked in a running store alongside a podiatrist. On a daily basis we would see and hear people criticise these shoes for being the cause of their pain without noting that the reason for their pain was actually in fact, their own stupidity.

When using minimalist running shoes and running on your mid-foot, you are effectively changing your biomechanics. Over time, your calf muscle will alter in size and strength, the muscles in your foot will strengthen and your gait will change. Muscle breakdown and rebuild can cause aches and pains and will take time. But don’t let that put you off. As we used to say in the shop, what’s worse? A little pain and discomfort now, or aches, pains and nobbly knees for the rest of your life?

When starting out, it is important not to get too taken aback by your new found foot freedom. The following video is a great resource for those in the early stages of transformation:

Have you tried barefoot or minimalist running? Click the Facebook link below and let us know how it’s going!”