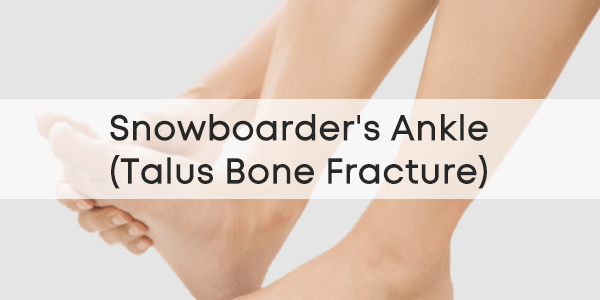 What is Snowboarder’s Ankle? 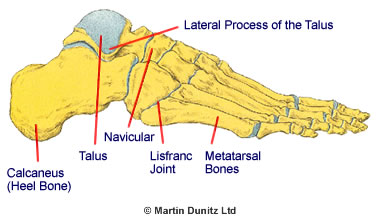 The talus is located above the heel bone, deep in the ankle, and joins with the shin bone above it to form the ankle joint. There is also some contact with the lateral malleolus of the fibula (bony prominence) on the lateral (outerside) of the ankle. The ‘lateral process of the talus’ is a medical term that refers to the part of the talus bone located on the outerside of the ankle, immediately above the heel bone.

A history of an ankle sprain when snowboarding is common, as with snowboarding the foot and ankle are fixed in stiff boots and strapped to the board whilst twisting the ankles to change direction. Typically, there is ankle pain at the back of the lateral malleolus of the fibula (bony prominence on the outerside of the ankle). This can be extremely tender to touch. It is usually accompanied by swelling and bruising.

Where there is persistent ankle pain over a period of weeks, with no bony injury showing on an x-ray, then a CT scan should be considered. If a snowboarder’s ankle is suspected then the patient should use a removable plastic cast and crutches until the CT scan is done. The CT scan is able to show fractures of the lateral process of the Talus in a good deal of detail.

Recognising this injury as early as possible can help reduce the likelihood of subsequent ankle joint degeneration and resulting functional disability. If this injury is not picked up early then the person may be attempting activities with a fracture through the articular surface of the ankle joint. Loose bodies can accumulate within the ankle joint and lead to further joint damage.

In the early stages treatment is similar to that for a sprained ankle. Ice packs may help with the pain but pain-relieving medication may also be necessary. The Aircast ankle cryotherapy cuff is the most effective method of providing ice therapy, whilst protecting the injured tissues from further damage, and is the professional’s choice. It can provide continuous ice cold water and compression for 6 hours – and significantly reduce pain and swelling. Once the initial ankle swelling has resolved a more thorough examination is possible.

Even if the injury is diagnosed early, there are associated long term problems following a fracture of the lateral process of the talus. This is because the talus doesn’t have a very good blood supply and this limits the potential to heal. This can lead to delayed fracture union, chronic pain and eventually arthritis of the ankle.

During surgery, any loose bodies are removed and the fracture is fixed with screws. After surgery around six weeks of restricted weight bearing wearing a plastic walker boot brace is usually required. Once full fracture healing is confirmed by the doctor, then rehabilitation can begin with a physiotherapist. Hydrotherapy exercises are very helpful in regaining ankle range of movement. Non weight bearing exercises, such as pool running using a buoyancy belt and pool noodle, also allow the patient to regain fitness. Manual therapy with the physio is important and can help to restore normal ankle movement.

What you can do:

The use of a wobble board to enhance your balance and proprioception can help to prevent ankle injuries by improving proprioception and ankle stability. The wobble board, together with ankle braces, are commonly used in the rehabilitation of ankle instability. Wobble boards are designed to assist the re-education of the proprioceptive system by improving sensory receptor function, essential for snow based activities. Previous research has also shown that wobble board training improves single leg stance ability and balance, while other studies have suggested that patients with ankle instability who underwent wobble board training experienced significantly fewer recurrent sprains during a follow-up period than those who did not follow the training programme.

Strengthening exercises with resistance bands can also help improve proprioception as well as improve multi-planar movements that are needed to snowboard.

Wearing a sports ankle brace and high cut shoes may also give more support to the ankle. This acts as a physical restraint and helps to prevent going over on the ankle. For snowboarding we recommend the Aircast A60 ankle brace , which is an excellent preventative ankle brace for sports.