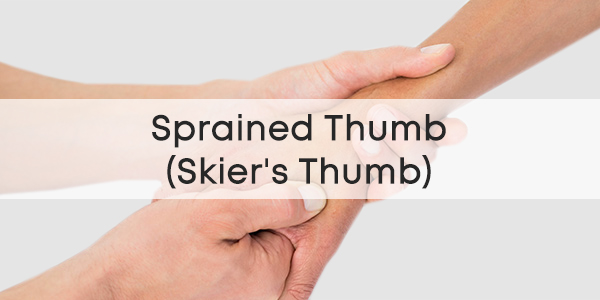 What is a Sprained Thumb Injury?

A sprained thumb is often referred to as skier’s thumb, due to the prevalence of this injury during skiing. It is a common cause of thumb pain and swelling. Skier’s thumb refers to damage to the ulnar collateral ligament at the base of the thumb. It is important to note that this injury is not exclusive to skiers and can occur to anyone where there is sufficient force applied to the thumb that takes it in a direction furthest away from the hand (described as thumb abduction and extension). 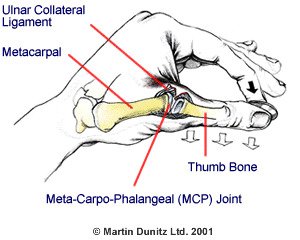 In days gone by it afflicted gamekeepers and was known as ‘gamekeeper’s thumb’ due to it being an occupational hazard of the gamekeeper. As well as skiers, football goalkeepers and rugby players are also susceptible to this injury.

Skier’s thumb is an apt description of this injury since the mechanism of injury commonly occurs during skiing, if the skier holds on to the ski pole during a fall. 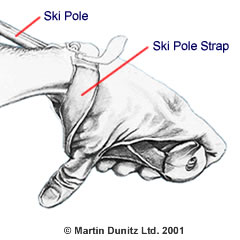 Signs & Symptoms of a Sprained Thumb

There is pain and tenderness over the ulnar collateral ligament of the thumb. The ligament is located at the ‘web space’ between base of the thumb and the base of the index finger, on the inside of the knuckle (MCP) joint.

In severe sprained thumb injuries there is often immediate thumb swelling and bruising may develop in a few days. In more chronic cases of sprained thumb that have not been diagnosed early, then there may be a persistent thickening of the joint with chronic thumb swelling. The joint between the metacarpal and thumb bone (meta-carpo-phalangeal or MCP joint) will feel lax and unstable.

The ability to pinch grip small objects between the thumb and the index finger is often severely impaired because of the resultant instability in the MCP joint (see anatomy image above).

Diagnosis is made by physical examination. Stressing the ulnar collateral ligament reveals instability and excess movement around the joint. This can be confirmed by taking an x-ray while stressing the joint, although x-ray evidence is not always helpful in isolation.

In the immediate period following damage to the ulnar collateral ligament of the thumb, ice packs and compression are the best treatments. Non steroidal anti inflammatory drugs ( NSAIDs ) can be prescribed by a doctor to help relieve inflammation and pain. Anti inflammatory gel can also help to relieve pain.

Sprains tend to resolve in around four to six weeks and can be aided by physiotherapy treatment. Ultrasound can be effective in the early stages, then massage and mobilisation can aid ligament repair and help restore function. Thumb strength and dexterity can be improved by using hand therapy balls and therapeutic putty. Grip and thumb strengthening devices can also be useful to restore normal hand and thumb strength. A physiotherapist will prescribe an exercise and stretching programme to be carried out.

Where there is a total rupture of the ulnar collateral ligament, then surgical repair may be considered. In some cases the ruptured ligament becomes entangled in the soft tissue at the base of the thumb. This is known as a ‘Stener lesion’ and it usually indicates that surgery would be appropriate as ligament healing is impaired otherwise.

Ulnar collateral ligament injuries may sometimes be accompanied by an ‘avulsion’ fracture, where one end of the ligament is pulled so forcefully that is pulls a small piece of bone off the metacarpal of the thumb. If the fragment of bone is closely aligned to its original position, then it usually heals without surgery. If there is a complication with the fragment, and the two pieces of bone or not united then surgery may be necessary.

Ruptured ulnar collateral ligament, without stener lesions, have a good capacity to heal without the need for surgery. For this reason, many doctors simply immobilise the thumb in a plaster cast called a ‘thumb spica’, for six weeks. A removable wrist support with thumb spica is more comfortable and may be used, depending on the preference of the treating doctor. Following successful rehabilitation, a return to sporting activities is possible at around 10 to 12 weeks.

Taping techniques are useful to allow movement along with a degree of stability and reassurance when returning to activities of daily life or sport.

If there is residual instability or a lack of pinch grip strength in those cases that have been managed conservatively, then surgical repair is appropriate. There are several surgical methods, but basically the surgeon fixes the damaged ligament back in place using wire or sutures. Following surgery, the thumb is usually immobilised in a thumb spica for six weeks. Once the thumb spica is removed, then physiotherapy treatment is very important to regain range of thumb motion, rebuild thumb muscle strength and to resolve stiffness.

Skier’s thumb accounts for 10% of all skiing injuries. Unless you are in deep powder snow and fear losing your ski poles, it’s best not to put your hands inside the ski pole loop when skiing. This greatly increases the risk of sustaining a skier’s thumb sprain in the event of a fall. In addition, the wearing of a thumb stabiliser helps to protect the ulnar collateral ligament, without limiting hand movement and function.