Sciatica is actually a term that has different meanings for different people and is recognised as a general term referring to leg symptoms which could be presenting as pain or nerve sensations with or without back pain.. The sciatic nerve runs from the lower part of the spine down the back of both legs to the feet, forming what is effectively an ‘electrical cable’ to and from the brain. Sciatica symptoms vary from a mild cramping or tightening sensation in the hamstring or calf muscles (that can be interpreted as the pre-cursor to a strain) to a constant shooting pain in the buttock, hamstring and down to the foot (a phenomenon known as referred pain).

Radiculopathy is not a pain condition but a loss of nerve function presenting as a weakness, loss of sensation reduced reflex. Radicular pain tends to be a sharp shooting pain and relates to a nerve root and often called sciatica.. Sciatica can seriously affect the health and quality of life of patients and a staggering 40% of people will suffer from some degree of sciatica in their lifetime.

Although the cause of sciatica often lies in the spine, not all sufferers will experience back pain and symptoms can be variable. The problem can manifest as back pain with leg pain, or leg pain only. Some sufferers will experience numbness or weakness in their lower limb. Sciatica can be caused by problems with the facet joints in the lower back; problems with the sacro iliac joint; or through irritation of the sciatic nerve in the buttock (piriformis syndrome), but the major cause of sciatica from the lower back is a herniated disc (‘slipped disc’).

The discs are located between each of the vertebra that make up the spinal column. These discs consist of a tough outer fibrous layer that surrounds a gel-like nucleus centre. Repeated over-use during prolonged sitting, bending, lifting, and sporting activities can lead to degeneration of the outer layer of the disc. If this degeneration is sufficient, the nucleus material is liable to prolapse out of the disc. 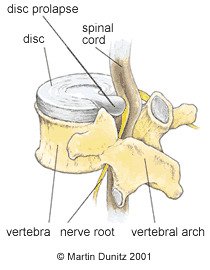 As the gel material leaks out of the disc, it cannot move directly backwards due to the spinal column and instead will move to the space on either the left or the right of the vertebra. This space (foramen) is where the nerve roots also leave the spinal column, therefore the herniated disc and reduced space can pinch on the nerves, disrupting the signal that is sent to the leg. This pressure on the nerve root may cause sudden and severe pain that can be felt anywhere along the pathway of the particular nerve root that is being obstructed. Most commonly, the nerve roots affected produce pain in specific patterns or distributions which can be diagnosed by a chartered physiotherapist. Sciatica can produce pain in the buttock, the hamstrings, back of the knee, the calf or the heel.

Originally the herniated disc model had been regarded as the sole cause of pain in sciatica. However, more recent clinical observations have shown that this may not be the case. For example, sciatica is not present in some patients who have an obvious herniated disc on an MRI scan. In addition, the severity of sciatica symptoms is often not related to the size of the herniated disc. These findings would suggest that other mechanisms apart from mechanical compression may be responsible for the symptoms. Increasing evidence from research studies would suggest that inflammation of areas of the nerve root may be involved.

Symptoms vary from a mild cramping or tightening sensation in the hamstring or calf muscles (that can sometimes be interpreted as the pre-cursor to a strain) to a constant shooting pain in the buttock, hamstring and down to the foot.

In some instances, flexion (bending) of the lower back can increase pressure on the discs and cause prolapsed disc material to aggravate adjacent nerve roots. This means that any bending forwards, such as when putting on or taking off shoes, will typically irritate the problem and lead to a worsening of the sciatica pain. It is not just bending forwards that can aggravate the problem. Sitting for a prolonged period can increase disc pressure and sciatica symptoms; so sitting in a theatre or at a desk, or driving often cause discomfort and lead to a flare up in people with sciatica. Lifting also typically causes irritation of the nerve roots in the lower back. This can be extremely frustrating in people with sciatica who have young children, as attending to them can aggravate their problem.

The combination of mechanical and inflammatory factors that contribute to sciatica means that exact diagnosis of the origin of the problem is not always straightforward. An MRI scan of the back can show whether a herniated disc is present, together with the size and direction of the prolapse from the Herniated disc. However, as mentioned above, the size of a disc prolapse is not necessarily related to the level of pain reported by the patient. Indeed, patients with an obvious Herniated disc on an MRI can have no pain, whilst those with no obvious herniated disc can have severe symptoms of pain and/or muscle weakness.

For this reason, further diagnostic tests provide valuable information for the medical team. Needle electromyography (EMG) records the electrical activity of muscle fibres. A fine gauge needle is inserted into muscles that are supplied by the Sciatic nerve, in what is an uncomfortable but tolerable examination. Needle EMG feedback can produce findings that suggest a nerve root injury.

Alternatively, nerve conduction studies (NCS) use a non-invasive stimulator to apply a brief electrical impulse to a peripheral nerve, with the response being recorded by electrodes. The velocity of the nerve transmission can be accurately measured, with healthy nerves transmitting the electrical impulse faster than diseased ones.

Anyone with back pain who has any of the following should consult their doctor as soon as possible:

Pain-relieving medication and heat packs are usually necessary during the first few days following a Herniated disc, but the best available evidence suggests that patients with sciatica due to a herniated disc should be advised to remain as active as they possibly can. This is based on the fact that research shows no significant difference between bed rest and staying active, and that there is no evidence that staying active is harmful for either severe low back pain or sciatica.

In many cases of herniated disc, the symptoms can be relieved if the patient gets into a position of spinal extension. Bending backwards can help counter-balance the excessive forward bending and is a key element of rehabilitation of disc herniation but does depend on the presentation of symptoms and pain. In the early stages of injury, this position may be too painful so should be avoided until it becomes less aggravating. Spinal extension can be achieved by lying on the front and gently propping the shoulders up on the elbows. Alternatively, a back stretcher can help achieve spinal extension while the user simply lies down and relaxes. In most cases, this position puts the spine in the opposite position to that in which the injury occurred (spinal flexion or bending).

Although the symptoms of sciatica normally settle much faster, this healing of the disc can take 6 to 12 weeks to become more comfortable. For this reason, and to reduce the chances of a recurrence, the patient should follow the rehabilitation programme set by a chartered physiotherapist. This will involve regaining normal movement in the lumbar spine, improving postural habits and learning how to contract the muscles that support and stabilise the back.

Manual therapy in the form of spinal manipulation has also been shown to be effective in the treatment of disc related problems and Sciatica. Most cases of sciatica tend to settle down with physiotherapy treatment, but severe cases of sciatica due to herniated discs may require steroid injections or even surgery. Caudal epidural steroid injections (ESIs) bathe the nerve roots in fluid that reduces inflammation. They can be very effective in relieving the symptoms of sciatica.

Minimally invasive surgical techniques can be considered when all other treatments have failed to resolve sciatica and there is unremitting pain. These include discectomies, where pressure on the nerve is relieved or a minimally invasive removal of the protruding disc material. Disc replacement is another surgical option, but the long term effects of this relatively new technique are not yet fully understood.

In order to avoid a recurrence of the problem it is important to take better care of back posture. An understanding of good posture is necessary to achieve this. Viewed from the side, the spine consists of a series of curves.

The curves increase the load-carrying capability of the spine compared to if the spine was just straight. The lumbar part of the spine consists of a forward curve and as long as this is maintained, posture will be reasonably good. It is important that this improved posture is maintained during all activities, particularly when sitting for long periods – slumping should be avoided.

A lumbar roll placed at the bottom of the back or a seating support can be effective when sitting to help maintain the lumbar curve and improve comfort. Driving for long periods should be avoided if possible and where it is unavoidable regular breaks with stabilising exercises and stretches, especially backwards into extension are a good idea. Movement is important so avoiding any sustained positions is best avoided.

In the long term, adopting a healthy lifestyle reduces the likelihood of reoccurrence smoking cessation, alcohol reduction, healthy diet and improved general fitness can be key.