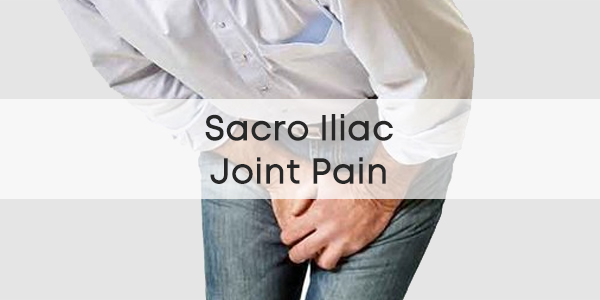 What is Sacroiliac Joint Dysfunction?

The sacroiliac (SI) joint can be a common source of back pain. The sacroiliac joint is located at the back of the pelvis and several scenarios can produce back pain in this region of the spine, including a traumatic incident, biomechanical malalignment, hormonal changes during pregnancy, or inflammatory joint disease.

The SI joints are comprised of the articulations between sacrum and the two Ilium bones of the pelvis. The joint surfaces are covered with articular cartilage and the joints are reinforced by thick, strong ligaments, which give the joint great stability. 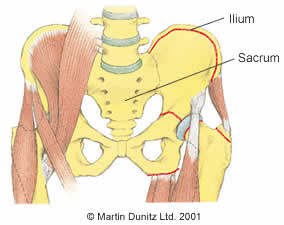 The sacroIliac joint helps to transmit forces during weight bearing activities. There is a lot of controversy between anatomists over movements at the sacroIliac joint, but it is generally agreed that there is forward and backward, as well as rotational movement (nutation), but only by a couple of millimetres.

At the beginning of the last century ‘sacroIliac joint sprain’ was the most commonly diagnosed lower back problem, but as the medical professions began to understand referred pain from disc problems it was realised that sacroIliac joint sprain was not as common as first thought. However, the sacroIliac joint can produce pain, due to a number of causes. These causes may include a traumatic incident, overuse or biomechanical malalignment, hormonal changes or inflammatory joint disease.

Traumatic incidents, biomechanical mal-alignments and hormonal changes can all lead to sacroIliac joint dysfunction that can be described as ‘mechanical’ in nature. The ‘self braced’ (by ligaments) position of the sacroIliac joint can be altered by these factors and the joint can lose its stability. This changes the mechanics of the joint, putting abnormal pressures on the joint surfaces, ligaments and surrounding muscles. Muscle imbalances in the area, in particular the influence of the piriformis muscle on the SI joint, can also cause asymmetries and therefore injuries in the area.

It is easy to see how trauma can produce this problem; when a person lands on one buttock during a fall, for example. A similar process may occur gradually if there is altered alignment or a discrepancy of length in the legs. This can lead to sacroIliac joint dysfunction and pain due to repeated stresses on the sacroIliac joint during sporting activities. Similar results may occur from imbalances around the muscles of the pelvic region. Prolonged sitting or poor posture, such as always sitting with legs crossed to the same side or sitting at an angle to work at a computer, can cause strain on one side of the SI joint and result in changes to the ligaments and other structures.

Inflammatory disorders can also produce pain in the sacroIliac joint. These disorders are classified as ‘spondyloarthropathies’, which simply means a disease that affects the spine. Among these conditions are ankylosing spondylitis, psoriatic arthritis, inflammatory bowel disease and Reiter’s syndrome. These conditions will be identified with blood tests. Once confirmed, a referral to a consultant rheumatologist is required.

Mechanical sacroIliac joint dysfunction typically causes a dull ache that is located at he base of the spine on the affected side(s). The pain may become worse and ‘sharp’ in nature during activities such as sitting, bending, lifting, standing up from a seated position, or lifting the knee up to the chest during stair climbing. Sometimes the pain can refer to the groin, buttock or the back of the thigh although, unlike referred pain from a disc prolapse, sacroIliac joint pain rarely goes below the knee.

Rest from the aggravating activities is essential during an acute episode of pain. Once the person has found a position that relieves the pain, then this should be maintained as much as possible during the first 24 hours. Over the counter analgesic medication normally brings some relief of symptoms. In more chronic cases pain relief is possible with a TENS unit (a battery powered device that ‘blocks’ pain signals by introducing a direct current to the body).

If sacroIliac joint dysfunction is caused by biomechanical factors, such as muscle imbalances, a difference in the left and right leg length or altered lower limb alignment, then these causes must be addressed. Orthotics (specially made inserts that go in the sole of the shoes) can be helpful in some cases. Specific muscle strengthening or stretching exercises can also remedy postural malalignment which may be contributing to sacroIliac joint dysfunction. Often the iliacus and psoas muscles (which flex the hip) are overactive and tight. The piriformis muscle in the buttock can also become very tight and pull on the sacrum bone, affecting the position of the SI joint. This can be diagnosed by a physiotherapist and advice provided accordingly.

Passive mobilisations by a physiotherapist can be very effective where normal sacroIliac joint movement is ‘blocked’. This has the effect of gently facilitating normal sacroIliac joint movement, thus removing abnormal stresses on the ligaments which surround the joint. For long-term relief strengthening exercises for the core muscles need to be maintained to improve stability around the pelvic region and ensure injury does not reoccur. Once normal sacroIliac joint movement has been restored, more active rehabilitation can be undertaken. This involves specific muscle work for the 30 plus muscles whose activity can affect sacroIliac joint stability – the series of exercises is different in each individual. In a sporting individual these exercises should be progressed to functional activities which are specific to the particular sport. This helps to prevent a recurrence once the person resumes their sport. Many people find that pool exercises using a floatation belt can help to relieve pain and encourage normal sacroIliac function. Using a sacroIliac belt whilst re-introducing sport may also reduce the risk of re-injury and ensure movements remain pain free as activity is increased.

In order to avoid a recurrence of the problem it is important to think about preventative actions and take care of the back in everyday situations. An understanding of good posture is necessary to achieve this. Viewed from the side the spine consists of a series of curves, these curves increase the load-carrying capability of the spine. The lumbar part of the spine consists of a forward curve and as long as this is maintained, posture will be reasonably good. It is important that this improved posture is maintained during all activities, particularly when sitting for long periods – slumping should be avoided. A lumbar support placed at the bottom of the back can be effective when sitting to maintain the lordotic curve of the lower spine and reduce the strain on muscles. Driving for long periods should be avoided.

In the long term, good posture is maintained by increasing the muscular stability of the spine, but an effective aid to improve sitting posture is a sitting support that can be used when driving or when sitting in the office. These work by supporting the forward curve at the bottom of the back which facilitates good posture and improves the load bearing characteristics of the back.

Research has shown that specific exercises, known as core stability and strength exercises, can be effective in relieving back pain and restoring normal function, by reducing compensatory patterns and muscle imbalances around the area. These exercises are most effective where the problem is caused by poor postural habits. Once the correct technique has been mastered under the guidance of a physio, these exercises are very easy to do and should feature in a day to day routine for a healthy spine. They are not too vigorous and they can be done by people of all ages. More advanced exercises using swiss balls can then be used to relieve and prevent back pain.