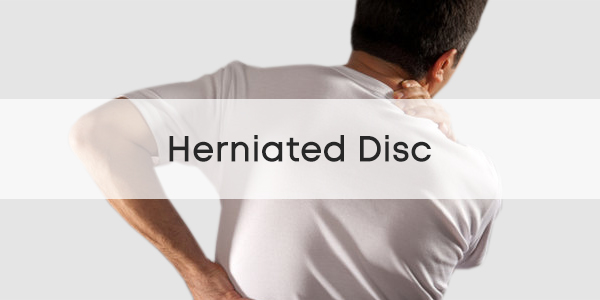 What is a Herniated Disc?

Herniated discs occur most often in the lumbar spine (lower back) and are a frequent cause of back pain. This common back injury is sometimes referred to as a ‘slipped disc’ but this is a crude description of what may happen. 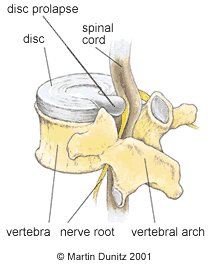 Usually one offending movement (most commonly bending or lifting) will put too much strain on the weakened outer part of the disc, which tears and allows the gel from the inside of the disc to protrude out. As the gel material leaks out of the disc, the onset of pain in the back can be sudden and severe. This back pain is due to chemical reactions from the gel material touching tissues in the back and also from pressure as the disc gel pushes against soft tissues in the back. Though herniation is likely to consist of both the annulus (outer layer) and the nucleus as we get older. There are often three different contributors to disc herniations: overload, ageing and genetics.

If the herniated disc pushes against a nerve root in the spine then pain can be referred down the course of the nerve. In the lower back if the nerve roots are put under pressure by the herniated disc, then pain, weakness and altered sensation can be referred down the sciatic nerve to the buttock, hamstring, calf and foot. This is known as sciatica.

A physiotherapy assessment can diagnose a herniated disc, where needed the injury will be confirmed with an MRI scan of the back to accurately diagnose and depict the size and direction of the prolapse. However, the size of a disc prolapse is not necessarily related to the level of pain reported by the patient. Scientific studies have shown that patients with a large disc prolapse may not report any symptoms. The pain is thought to correlate to the structure that is being ‘pinched’ by the disc, such as a nerve.

The good news is that this pain often settles and the extruded material can often get reabsorbed.

Anyone with back pain who has any of the following should consult their doctor as soon as possible:

Pain-relieving medication is usually necessary for a herniated disc, and heat packs are usually necessary during the first few days, but the best available evidence suggests that patients with a herniated disc should be advised to remain as active as they possibly can, so long as their symptoms are not aggravated. This is based on the fact that research shows no significant difference between bed rest and staying active, and that there is no evidence that staying active is harmful for either severe low back pain or sciatica. If tolerated, walking on flat ground or swimming can help ease the pain and symptoms of disc herniation. Prolonged sitting, lifting or forward bending should be avoided until symptoms start to resolve. A back support brace can be helpful to improve posture and relieve pain by preventing aggravating movements and providing support for the injured structures.

In many cases of a herniated disc, depending on the direction of the prolapse, the symptoms can be relieved if the patient gets into a position of spinal extension. This can be achieved by lying on their front and gently propping the shoulders up on the elbows. This position can be used as a corrective exercise to counteract the pressure that has built up form flexing forwards. If it is too painful at first, lying on your back with the hips, knees and ankles positioned to 90 degrees with the support of a stool, sofa or similar underneath the calves has been shown to provide the most relief on inter-disc pressure. Alternatively where the symptoms are more severe, the back stretcher can help to relieve back pain by the user simply lying on their back over this simple device. In a lot of individuals this puts the spine in the opposite position to that in which the injury occurred.

Manual therapy in the form of spinal manipulation has also been shown to be effective in the treatment of disc related problems and sciatica. This can relieve nerve root compression caused by fibrous scar tissue following a disc prolapse, or the build up of gas (nitrogen). This gas build up is a consequence of disc degeneration and tends to be more common in those aged over 40.

In general, pain should start to settle within six weeks but this can be longer and if there has been significant leg pain symptoms can take over twelve weeks. For this reason, and to reduce the chances of a recurrence, the patient should follow the rehabilitation program set by a chartered physiotherapist. This will involve regaining the range of movement in the lumbar spine and strengthening the muscles which stabilise and support the back. Postural advice will also be given in relation to the individual work and social circumstances. Advice on seated positions at desks or adaptations to driving can be given to help reduce the risk of re-injury. A lumbar support may be useful to help maintain the lordotic curve at the base of the spine when sitting for extended periods. The overall advice is to stay active and avoid too long in any one position to avoid reoccurrence. Even if an MRI scan shows significant herniation, treatment and approach will depend entirely on presenting symptoms.

Most Herniated discs tend to settle down with physiotherapy treatment, but severe cases of Sciatica may require steroid injections or even surgery. Caudal epidural steroid injections (ESIs) bathe the nerve roots in fluid that reduces inflammation. They can be very effective in relieving the symptoms of sciatica.

Following a herniated disc there is always a danger of a recurrence of the problem just like any injury. In order to avoid a recurrence of the problem it is important to get as fit, strong and active as possible so that you have confidence in your back. An understanding of the effects of a poor lifestyle on your back pain e.g. smoking, poor fitness and diet and embracing a more active approach will help reduce incidence. Sometimes a lumbar roll placed at the bottom of the back can be effective when sitting to maintain the lordotic curve and may feel more comfortable. Driving for long periods should be avoided or regular breaks should be taken and stretches into extension (backwards). Any sustained position is best avoided with regular movement being the key