What is Achilles Tendonitis? 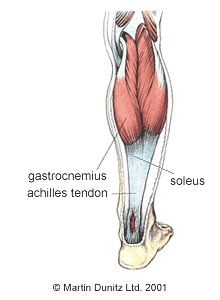 Achilles tendonitis is characterised by inflammation of the paratenon. It can be due to a number of causes, but direct trauma can be implicated in this condition. The other major cause of inflammation of the Achilles paratenon is training error and overuse. A sudden increase in training intensity, duration or frequency can overload the tendon and cause an inflammatory response within the sheath. Achilles tendonitis is common in middle distance and long distance runners, due to the repetitive nature of these activities, as well as those involved in contact sports, particularly football.

Other errors include running on hard or uneven surfaces and wearing incorrect or inadequate footwear. These may be exacerbated by biomechanical factors. The Achilles tendon does not attach to the heel bone in a straight line but spirals downwards – this is to generate more muscle force. If the person has flat feet the tendon whips round and the tendon sheath tends to get inflamed on the inside, or medial, aspect. Other biomechanical problems can cause a similar effect – namely weak calf muscles, tight calf muscles or a stiff ankle joint, which all place additional strain on the tendon.

The appearance of the Achilles tendon region becomes thickened, compared to the unaffected side, and will also be tender to touch. A rough, grating sound or creaking can often be experienced when the person moves their ankle up and down. This is known as ‘crepitus’ and is caused by the formation of fibrous tissue within the Achilles paratenon in the latter stages of the inflammatory process.

In the early, painful stage of the injury it is important the follow the PRICE protocol – protection, rest, ice, compression and elevation (never apply ice directly to the skin). Ice packs for a period of twenty minutes every couple of hours may help with the pain but pain-relieving medication may also be necessary. A cryotherapy cuff is the most effective method of providing ice therapy, whilst protecting the injured tissues from further damage, and is the professional’s choice. It can provide continuous ice cold water and compression for up to 8 hours to significantly reduce pain and swelling.

It is also important to rest the affected Achilles tendon from sporting activity until this acute pain resolves. Non impact exercises, such as pool running with a buoyancy belt, can be useful to maintain fitness without putting strain on the Achilles tendon. If the pain is severe non-steroidal anti-inflammatory drugs (NSAIDs) may be prescribed by a GP or topical anti inflammatory gel may be helpful.

An Achilles strap can effectively relieve the symptoms of Achilles tendonitis. By providing gentle compression an ankle support reduces stress on the Achilles tendon. Once the inflammation has settled, a physiotherapist may begin to stretch and strengthen the calf muscles. If the ankle or joints of the foot are stiff the physiotherapist can mobilise them to restore the normal range of movement. These measures have the effect of taking the excessive load off the tendon and normalising the biomechanics of the lower leg. A night splint support may be worn at night in chronic cases to help keep the calf muscles on stretch and maintain range of movement in to dorsiflexion so that the tendon doesn’t tighten up overnight.

There is nothing magical about eccentric muscle strengthening in the role of alleviating tendon problems. The key is the controlled progression of exercise, which elicits an adaptation in the tendon that produces increased tensile strength. Research has shown that eccentric muscle contractions generate more tension than isometric or concentric contractions and it is often a neglected component of strength training. By using just eccentric work this variable can be controlled.

It is important to note that the load and number of repetitions must be carefully recorded and progressively increased. This ensures that the overload on the tendon is carefully controlled and and gradually the speed of the exercise is increased, making the exercises more sports specific.

The patient starts with double legged calf raises, thus sharing the load with the ‘good’ leg. The eccentric component is the lowering phase, which should be done slowly.

The progression is to do the exercise on the affected leg and gradually increase the load by introducing weights. Then the speed of the exercise is increased.

Research has suggested that the risk of a recurrence of the injury may be reduced by following a programme that incorporates eccentric muscle work. Eccentric muscle work refers to a muscle that lengthens whilst contracting – a contraction that occurs during movements such as landing and decelerating. Maximum tension is generated in the muscle during the eccentric contraction and this causes the tendon to adapt and get stronger.

An eccentric strengthening programme forms the basis of the rehabilitation exercises detailed for this injury, and can also help with injury prevention.

Training errors must be avoided and the intensity, duration and frequency of training should be carefully monitored and gradually progressed, with no sudden increases. Muscle strength and flexibility should be maintained through regular strengthening and stretching sessions. The introduction of hill training or increasing plyometric work should be gradually increased. The training surface should be appropriate to the sport and it is important to wear the correct footwear. Shock absorbing insoles can reduce the stress on the Achilles tendon region when running.