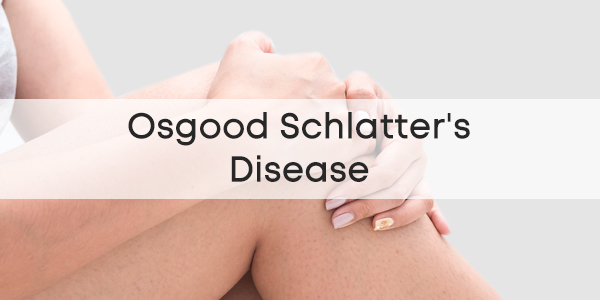 What is Osgood Schlatters?

Osgood Schlatters is a common overuse knee injury that affects the upper part of the shinbone, just below the knee. It is most common in adolescents between the ages of 9 and 14 years who are active in sports and can frustratingly cause an enforced lay-off for gifted sports people. It is more common in males than in females.

Osgood Schlatters is a form of traction apophysitis (pronounced “trak-shun apof-o-site-is”). It occurs on an area of the shinbone called the tibial tuberosity (this is the small lump at the top of your shin, just below the kneecap). 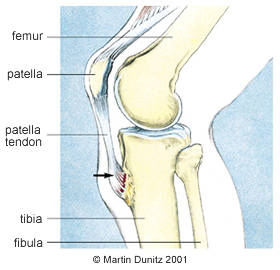 In some cases the pull of the strong thigh muscles on the immature bone can actually pull the tibial tuberosity away from the shinbone. This is called an avulsion fracture. Sometimes the initial inflammation may be as a result of trauma such as a kick to the tibial tuberosity, that leads to Osgood Schlatters.

Once Osgood Schlatters has established itself symptoms can persist for in excess of a year. Rest from sporting activities is usually adequate to resolve the condition but the return to activity must be supervised and progressed gradually by a chartered physiotherapist in order to minimize the chances of a recurrence.

Pain is the most obvious symptom. It is painful to touch the area of the tibial tuberosity and there is pain during sporting activity. The tibial tuberosity can become enlarged in some cases. Once Osgood Schlatters has established itself it is very difficult to get rid of. It may not resolve itself until the bone has fully matured at around the age of sixteen.

Anti-inflammatory drugs and corticosteroid injections are not recommended for this age group. Some clinicians advocate complete immobilisation in a plaster cast, but this is highly impractical and can cause other problems. Complete rest is the only treatment strategy that is universally recommended. This rest must be of sufficient duration to allow the painful tenderness of the tibial tuberosity to fully resolve. Ice packs to relieve pain can be effective during this period to help reduce inflammation around the area.

After resting, the tibial tuberosity should be pain free when touched. Following a pain-free period the patient should begin a gradual progression of exercise under the supervision of a physiotherapist. This is the best way to ensure that there is no recurrence of the patient’s symptoms.

Because treatment during the active phase of Osgood Schlatters is very difficult, it is important that young athletes and coaches do all they can to avoid getting the condition in the first place. For this reason the following strategies should be undertaken in a bid to reduce the chances of suffering from Osgood Schlatters:

The leg muscles helps to maintain their extensibility. This is particularly important in adolescents who may be going through a so-called growth spurt. During this time the long bones grow first and the muscles gradually adapt to the new length. However, during this period of adaptation the muscles are relatively tight. This tightness may lead to muscle imbalances that alter the forces on the leg. Some physiotherapists believe that this can lead to conditions such as Osgood Schlatters. A massage stick may also be used to help reduce the tension in the quadricep muscles after exercise.

Control the load on young legs

The load is determined by the frequency, duration and intensity of training and physical exertion. Frequency of training sessions should allow 1 to 2 days rest between each session. This allows the body to recuperate and respond to the physical stress under which it has been placed, so muscles adapt to the load without causing excess pull on the tibial tuberosity. The maximum duration of the session should be between an hour and an hour and a half. The intensity of the training should be slightly less than during a competitive match, but the activities undertaken should mirror what happens during a match, e.g. not running at the same pace for an hour.

The number of games played each season should be limited. The more gifted youngsters are often asked to play more games. Apart from representing the school team, they may be asked to play for the district and county teams. This level of activity can lead to Osgood Schlatters.

Plyometric exercises are those that involve taking off and landing in rapid succession. Hopping is an example of plyometric exercise that, if done too frequently, can lead to Osgood Schlatters. Similarly, resistance exercises using weight should be avoided, since they place too much stress upon young bones. Once the bones have matured and ‘hardened up’ (usually around the age of 16) then resistance training and plyometric drills can safely be started.