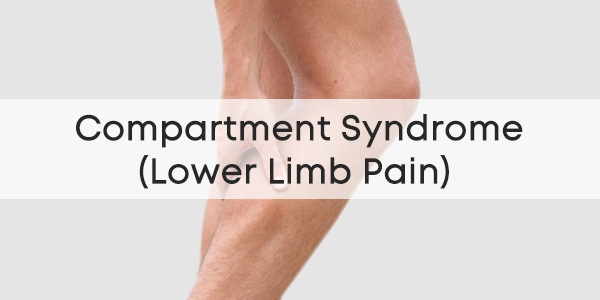 What is Compartment Syndrome?

The major symptom is pain which is brought on by sport. Usually it takes about 20 minutes of running before the pain gradually rises to the point where the person can no longer continue. The pain is cramp-like and is due to the constriction of blood vessels which prevent blood and oxygen from reaching the muscles. This can lead to permanent tissue damage. Usually, however, the pain is transient and will ease with rest. In some patients the increased pressure in the compartment can be felt as taut tension within the tissues.

What you can do?

In cases where the pain comes on with exercise, and is relieved after rest, conservative treatment such as physiotherapy and the prescription of orthotics (insoles) may reduce the severity of the symptoms, but cannot get rid of the problem. Once a diagnosis of compartment syndrome has been confirmed through measurement of raised compartment pressure, the most effective treatment is surgery. Surgery for compartment syndrome consists of an operation called a superficial fasciotomy, which involves splitting the fascia which surrounds the muscle to open up the compartment. This relieves the pressure on the tissues within the compartment.

Superficial fasciotomy surgery for compartment syndrome should be followed by aggressive rehabilitation under the supervision of a chartered physiotherapist to prevent scar contraction as this may restrict the tissues within the compartment and therefore ruin the surgery. Ankle pumping exercises should be initiated immediately with the legs in an elevated position. Ankle pumping exercises stretch the scar tissue and help to clear swelling. Ice packs are essential to help reduce swelling and inflammation following surgery and calf guards may be useful to compress the lower leg further reduce swelling.

Depending on the wishes of the individual surgeon and depending on which compartment has been operated on, a return to normal walking is usually possible between three and five days after surgery. Partial weight bearing exercises such as cycling and cross trainer in the gym can be started immediately, with a return to jogging after 10 to 14 days.

High compartment pressures appear to be an attribute that some people inherit, although this problem only really surfaces when we attempt to exercise. Unfortunately, there are no preventative measures to avoid this condition. However, gradually increasing training programmes and the introduction of speed or hill work may prevent the onset. Ensuring training shoes are adequate for the surface may also help reduce the risk of compartment syndrome.