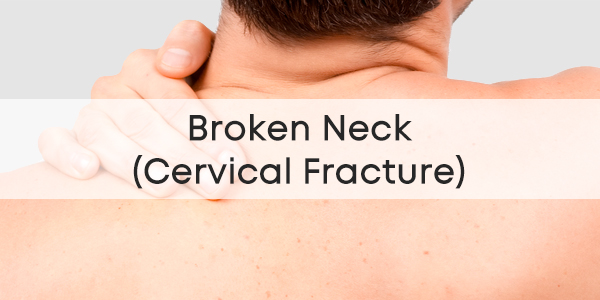 A broken neck (cervical fracture) is an extremely serious injury, which is fortunately rare in many sports. Motor racing, Skiing and Snowboarding are some sports that may hold a high risk of such as traumatic injury. There can be catastrophic consequences of a broken neck, because spinal cord damage can cause quadriplegia or death. The neck or ‘cervical spine’ consists of seven vertebrae in the neck, any one of which can become broken. In football, the injury usually occurs by the player being struck on the head whilst heading the ball. The force from the blow to the head is transmitted to the neck, where it can be resolved as a fracture.

In other sports, such as ice hockey, gymnastics, American Football and rugby union, the injury can occur more frequently, although it is thankfully still rare. In rugby it is usually a consequence of a collapse in the scrum, affecting the players in the front row. In American Football it can occur due to head trauma from opponent contact and the weight of the helmet can contribute to a broken neck. In ice hockey checking an opponent from the rear is the most common cause of a broken neck.

Depending on the direction of neck movement during injury the fracture may be due to over-flexion, over-extension, excessive rotation or compression. The fracture can occur at any of the seven vertebrae in the neck, with varying consequences. Generally speaking the prognosis is worse if the fracture is higher up the cervical spine, where the fracture can be fatal or result in paraplegia. Because of these serious possible consequences, first aid treatment should be attempted only by qualified medical personnel.

Signs & Symptoms of a Broken Neck

Catastrophic cervical spine injuries often present with an unconscious player on the field of play. Where there is spinal cord damage there will be an inability for the person to actively move their limbs and there will be no sensation in the limbs. There may be serious breathing difficulties. Alternatively, there may be a fracture with no damage to the spinal cord. These patients present with neck pain and should not be moved from the field by anyone except specialist paramedics and medics.

In sports people with a history of head or neck trauma, all cases of this nature should be treated as a cervical fracture until proven otherwise. A fracture should also be borne in mind in cases where the patient complains of neck, head or shoulder pain, or if there is a restriction of neck range of movement.

All treatment should be undertaken only by qualified medical personnel. In the acute stage this mainly requires specialist immobilisation to prevent damage to the spinal cord. Once the patient has been x-rayed, the management of the injury by an Orthopaedic Consultant is dependent upon the type of fracture.

Prolonged immobilisation for 6 to 12 weeks is achieved either by screwing the fragments together surgically or instructing the patient to wear a plaster cast. A neck support collar can be used to help support the head to relieve strain on the neck while it heals.

Once the fracture has healed, physiotherapy treatment under the supervision of a Chartered Physiotherapist is required to restore range of movement and neck muscle strength.

Because of the traumatic nature of a broken neck, prevention strategies that you can take are limited. Rule changes in sports have been very effective at reducing the incidence of catastrophic spinal injury. In American Football the spearing (head first) tackle has long been outlawed and spinal injuries have reduced greatly. In ice hockey checking an opponent in the back against the boards has been banned and this has reduced the number of spinal injuries. In gymnastics and trampolining ‘catchers’ should be positioned around the performer to prevent falls.