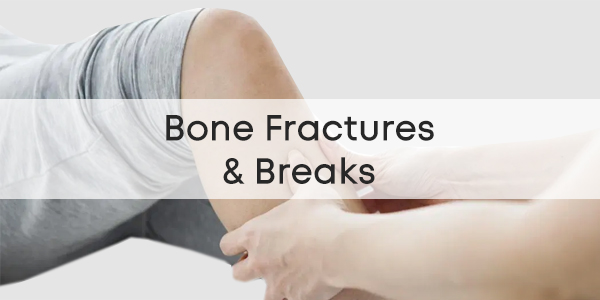 There are over one million fractures (broken bones) each year in the UK alone. Fractures can occur in people of any age, but two groups of people tend to sustain most fractures – the elderly and the childhood age groups. In children a broken forearm is the most common fracture, with boys sustaining fractures more than girls. Teenagers tend to be the most active age group, which increases their risk of injury, and their bones are more prone to breaking following the period of rapid growth during adolescence.

In the elderly age group a combination of osteoporosis (decreased bone density) and increased incidence of falls means that the number of broken bones increases with age. In the older age group women suffer more fractures than men – this is because hormonal changes during the menopause increase the incidence of osteoporosis. The most common fractures are the hip and wrist.

This guide explains exactly what bone is and the four main stages of bone healing. By understanding bone healing better you can feel more in control of the rehabilitation process and help your fracture to heal.

Bone is very strong, but also relatively lightweight. It is made up of microscopic channels that are surrounded by a very strong layer called the cortex, which in turn is surrounded by a tough outer surface known as the periosteum. When viewed in cross section the channels produce a honeycomb effect. Apart from making bones lightweight, the channels allow blood flow throughout the bone tissue which supports constant metabolic activity within the bone. 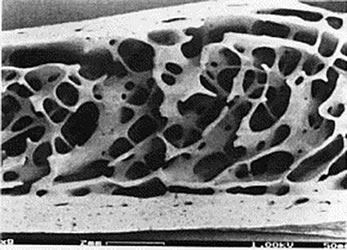 This metabolic activity means that bone is constantly re-modelling itself in response to the stress it is subjected to during exercise and work activities. There are three main types of cell that are active within bone: bone cells, osteoblasts and osteoclasts. All of these are present within the dense connective tissue of bone called the bone matrix. osteoblasts lay down new bone tissue and then revert to being bone cells that sit in the bone matrix, whereas osteoclasts are constantly active, reabsorbing bone tissue. The process of ‘bone modelling’ occurs all the time and this ability to constantly regenerate means that bone can heal fully following a fracture.

Because of the complications that can occur during the fracture healing process it is extremely important that you follow the expert advice of your orthopaedic consultant. Any interruption during the stages of bone healing described in this article can lead to a fracture ‘non union’ or ‘delayed union’, where the fragments come together extremely late or, worse still, don’t come together at all. Your orthopaedic consultant will guide you through the stages of fracture healing, which are described in the pages that follow.

The inflammation stage begins the moment the bone is broken and lasts for around five days. As we have described earlier, bone has a very good blood supply due to the channels within its structure. When a fracture occurs there is massive disruption to these channels and a large amount of bleeding from the fracture fragments. This is what causes immediate swelling and bruising in the area of the broken bone. This is known as a haematoma, which means bleeding within the tissue. 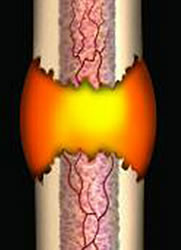 The damaged bone tissue at the edges of the fracture fragments die back and the dead cells release chemicals called cytokines which initiate the healing process. Osteoclasts work to remove the dead bone cells. However, osteoblasts are unable to work to lay down new bone tissue at this stage because of the movement of the fracture fragments which stops osteoblast activity.

The principle of treatment by a trauma doctor during this immediate stage following a broken bone is to ensure the fracture fragments are returned back into place. This helps to stem the blood flow from the broken bones and substantially reduces the pain.

The chemical and metabolic reactions that produce the soft callus begin a few days after the bone is broken. Fibroblast cells that are present in the granulation tissue begin to form cartilage and fibrocartilage. This is a spongy material that fills the gap between the two fracture fragments, although it remains quite weak to external stresses for around six weeks. For this reason it is important that there is not too much movement of the fracture fragments. The orthopaedic consultant will ensure there isn’t too much movement at the fracture site by doing repeat x-rays and making sure that the broken bone remains immobilised with a sling or removable plastic cast. 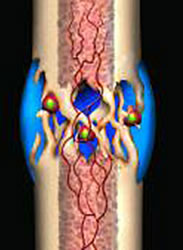 Removable plastic cast walkers are commonly used to immobilise injuries such as metatarsal fractures, a broken leg, a broken ankle or a broken foot. They are much lighter than a plaster cast and allow a greater level of mobility, making it much more comfortable and convenient to wear. Plastic cast walkers allow controlled weight bearing which greatly enhances healing and reduces rehabilitation time. Another advantage is that they can be taken off to allow the patient to undertake exercises and therapy. This helps prevent stiffness and muscle wasting.

After a couple of weeks, despite being quite fragile, the soft callus provides sufficient stability at the fracture site for new blood vessels to begin forming and for osteoblasts at the periosteum (the outer surface of the bone) to begin laying down what is called ‘woven bone’. This woven bone at the margins of the fracture is a little soft and disorganised, but it’s the first bone contact between the two fracture fragments.

From Two Weeks to Six or Twelve Weeks After the Fracture

From two to three weeks onwards a process begins whereby the fragile cartilage material of the soft callus is transformed completely into woven bone. This process typically continues for between six and twelve weeks, depending on the location and type of fracture (generally six weeks for the upper limb and twelve weeks for the lower limb). Hard callus formation is a complex process that is guided by the release of mineral compounds such as calcium and phosphate into the cartilage tissue, which subsequently transforms into a bridge of hard callus over the fracture site. 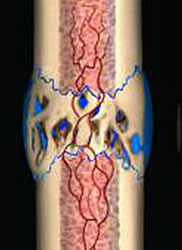 Once the hard callus has formed at the former fracture site, then fracture Union is said to have occurred. Fracture Union can be seen on x-ray at around six weeks in upper limb fractures and twelve weeks in lower limb fractures. One of the factors that encourages hard callus formation in lower limb fractures is gentle weight bearing exercise. This is why orthopaedic consultant encourage the use of removable plastic cast walkers, as they allow controlled weight bearing and stimulate hard callus formation, because bone responds to repeated gentle loading by laying down more bone tissue.

During normal bone healing the body will lay down more hard callus than is needed to unite the fracture fragments. As a result the fracture, site looks enlarged when viewed on x-ray. Bone remodelling begins once the fracture has united and may continue for several years, as a continuum of normal bone function. 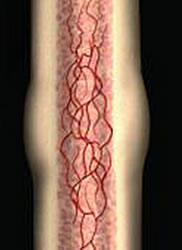 Over time, the normal shape of the bone is restored. Bone is laid down where it is needed by osteoblasts and removed by osteoclasts, depending on the stresses that are placed on the bone during every day and sports activities. At the bone remodelling stage of fracture healing a progression of weight bearing exercise is encouraged because it leads to an increase in bone strength. Your orthopaedic consultant will give permission to progress to full weight bearing activities.

The loosely organised woven bone is gradually replaced by lamellar bone, which is highly organised along lines of stress and therefore much stronger than woven bone. Ultimately, once the fracture healing process is complete, the bone should be at least as strong as it was originally.