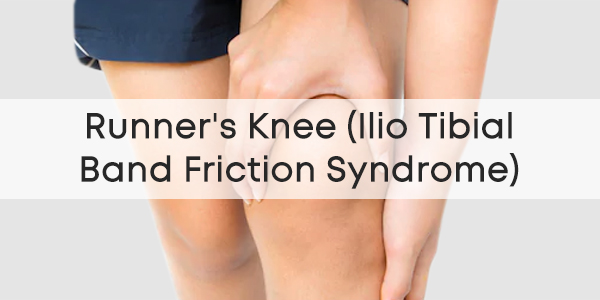 What is Runners Knee?

The iliotibial band is a fibrous band of tissue, which is partly fascia and partly tendon. It originates from the gluteal muscle, which is located in your buttocks. The ITB lies along the outside of your thigh and inserts into the lateral aspect of your knee.

ITB syndrome is an overuse/ overload injury. It is very common in runners, but can be experienced by cyclists and tennis players. It usually occurs when there is a sudden increase in the frequency and/or intensity of your training. In addition to a sudden increase in training volume, ITB syndrome is often associated with glute weakness, which causes excessive knee valgus and overpronation at the ankle. This issue is known as a kinetic chain problem, where certain joints or muscle weaknesses can cause issues in other joints. 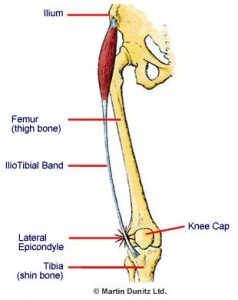 A sharp pain or burning sensation that is usually on the lateral (outside) side of your knee. The pain may travel up the side of your thigh to the outside of your hip.

Pain that continues to get worse with activities such as running or ascending the stairs.

Pain is at its worst in the first phase of bending your knee with 20-30 degrees of flexion. There is usually no, or very minimal, swelling.

Gradual onset of symptoms, which usually occur after a sudden increase in training. This is a very common problem for people who run uphill.

Running, especially up or down hill. Walking up and down the stairs.

Exercises to increase glutes strength and running gait correction. In some cases an iliotibial band release surgery is required but this is always a last resort. There has not been a great deal of research on the use of braces, tapes and foam rollers for this condition. These devices can offer some short term symptomatic relief, but the overall management is mainly focused on lower limb strengthening specifically glutes strengthening, lower limb static and dynamic control, retraining the running gait and load management.